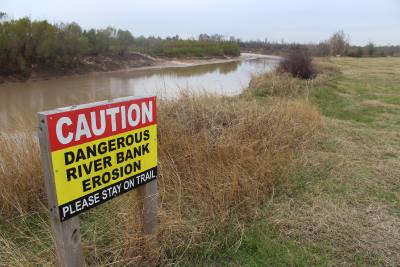 City staffers are pulling together all assets, or public infrastructure, that have the most potential to be harmed by the erosion to prioritize these assets going forward..

The city of Sugar Land commissioned Huitt-Zollars for a Brazos River erosion study.

WHAT WE REPORTED: In early November, Sugar Land City Council approved a contract in the amount of $125,000 with Houston construction engineering company Huitt-Zollars for a study on the Brazos River Bank erosion. The contract resulted in a budget amendment from the city’s capital improvement projects fund balance.

THE LATEST: Assistant City Manager Chris Steubing is in the process of gathering data and compiling information from city staff and the city’s consultant. Geotechnical experts from Texas A&M University met with the city staff members in late December to help them better understand the geomorphology occurring along the river as well as what circumstances and conditions are creating the most cause for concern, Steubing said. City staffers are also pulling together all assets, or public infrastructure, that have the most potential to be harmed by the erosion to prioritize these assets going forward, he said.

WHAT’S NEXT: The erosion study will take approximately four months to complete, and the city is coordinating with Fort Bend County, Steubing said. Additional details and information on the study’s findings are expected to be announced in late January, he said.

The following permits have been filed in the past week in Sugar Land and Missouri City.

One event this weekend is Kids Day Out in Missouri City.

The budget focused on community priorities identified in a recent resident poll, including infrastructure, drainage, sidewalks, safety and events.

16 traffic fatalities reported year to date in Fort Bend County, up from 2020

There have been more total crashes, major crashes and traffic fatalities in Fort Bend County so far in 2021 than during the same timeframe last year, according to the Fort Bend County Sheriff’s Office.