support local journalism become a community patron Community impact Newspaper's mission is to build communities of informed citizens and thriving businesses through the collaboration of a passionate team. Consider supporting our journalism efforts by becoming a Community Patron today.
Continue Reading contribute today
join us become a community member Community Members have access to our e-edition and can sign up for our daily e-newsletter
Already a Member? Sign in
sign up today
Election - Texas 2020 Primary

Two candidates will appear on the ballot for both the Democratic and Republican primary election for Texas House District 27 on March 3.

District 27 includes most of Missouri City and Stafford as well as a sliver of Sugar Land.

State Rep. Ron Reynolds, D-Missouri City, who is running as the incumbent, was first elected to the Texas House in 2010.

Early voting for the primaries runs from Feb. 18-28, and election day is March 3.

The winner of the Democratic and Republican primary will face off in the general election in November.

These Q&A's have been edited for clarity.

Seth did not respond to the questionnaire.

Virippan did not respond to the questionnaire.

Years in the district: More than 20

Why are you running to be the next state representative in House District 27?

I’m running for re-election so that I can continue fighting for my constituents and so Texans have access to affordable quality health care, strong public schools, criminal justice reforms, common-sense gun reforms and jobs.

What do you think is the biggest issue facing the district?

I believe the biggest issue facing House District 27 is addressing the underperforming public schools. Although that is largely a local matter, I will continue to work with our local officials to ensure that we provide all necessary resources for our public schools.

If elected, what will you prioritize for the 87th legislative session?

If re-elected I will continue to fight for my constituents by advocating for affordable quality health care, strong public schools, criminal justice reforms, common-sense gun reforms, climate change and jobs.

Ross did not respond to the questionnaire.

Commissioners also approved a grant application for funds to provide additional staffing for testing patients and collecting data about the coronavirus cases.

Amid the coronavirus pandemic, Second Mile is providing food to 500-700 families any day the nonprofit is open.

Sugar Land postpones May 2 elections to Nov. 3 in response to coronavirus outbreak

In the wake of the coronavirus outbreak, Sugar Land and Missouri City city councils have both postponed their local elections, moving them from May 2 to Nov. 3.

In addition to voting in favor of the new grading policy, the board also formally postponed the May 2 election, authorized paying idled employees and agreed to suspend a statewide teacher evaluation system. 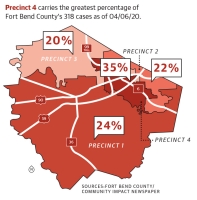 'To me, that’s an indication that our social distancing measures are having a positive effect,' said Jacquelyn Minter, Fort Bend County Health and Human Services Department director and local health authority,