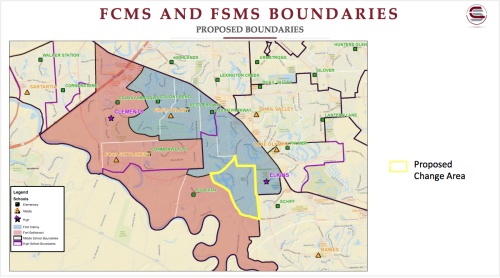 Fort Bend ISD officials will send this proposed boundary change to the Board of Trustees on March 25.

A southeastern section of the Riverstone community in Sugar Land is joining the First Colony Middle School feeder pattern following a Fort Bend ISD Board of Trustees vote to approve a boundary change on March 25.

The boundary plan will be implemented for the 2019-20 school year.

More than 100 people attended the meeting, including supporters and opposers of the boundary plan. Five parents on both sides of the plan spoke to the board, discussing topics including children moving away from friends, the affect of overcrowded schools on students and teachers and providing a long-term solution for students.

The boundary proposal was the result of a discussion from the Feb. 18 FBISD board of trustees meeting at which the board and administration reviewed annual enrollment data from the Population and Survey Analysts. Considering that data and parent feedback from the Feb. 18 meeting and previous meetings, the board asked administration to expedite a boundary change plan to balance enrollment between Fort Settlement and First Colony middle schools.

FBISD Chief of Staff Beth Martinez said told the board on March 25 that the goal was to balance enrollment for the long-term, and the new boundary plan keeps the schools at around 80 percent utilization over the next 10 years.

"During this planning process, we analyzed other areas, including moving the triangle north of [Hwy.] 59 back to First Colony, but we realized that with 74 middle school students, there would not be the impact we were looking for," Martinez said. "We also looked at other scenarios, such as moving parts of the Colony Meadows [Elementary] to First Colony, but that scenario didn’t balance enrollment or not for the long term."

The change affects 343 students from that section of the Riverstone community, assuming all sixth, seventh and eighth grade students attend First Colony for the 2019-20 school year. Some 107 rising eighth graders can remain at Fort Settlement if parents provide their own transportation, the district said.

First Colony enrollment dropped after students from Schiff Elementary School were relocated to Baines Middle School in fall 2018 with the opening of Thornton Middle, according to the district.

The approval also sets in motion the feeder pattern for Elementary School 53, which is part of the 2018 FBISD Bond package. The district is looking at land near Elkins High School for the new school, which would feed into First Colony, as well as provide enrollment relief for both Sullivan and Commonwealth elementary schools nearby.