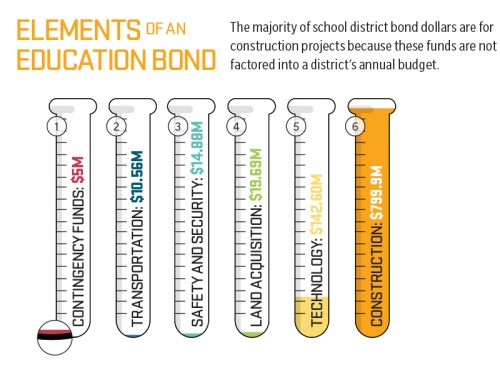 Fort Bend ISD residents face an important decision with a $992.6 million bond proposal placed on the Nov. 6 election ballot. The bond would support capital projects and include funding for land acquisition, school construction and renovations, system improvements and maintenance work.

These items were outlined in the school district’s nearly $1.7 billion capital plan developed this summer, according to FBISD documents. Administrators proposed a two-phase approach to implement the plan, recommending a second bond referendum for an estimated $705.5 million to go before voters in 2021.

With the $992.6 million bond, taxpayers will likely see a 3 cent increase in the tax rate over the next three years, assuming a 5 percent growth in property value, said Steven Bassett, chief financial officer for FBISD.

The increase would potentially result in an additional $76.53 annual tax increase for the district’s average homeowner, based on the current average taxable value of a home in FBISD, which is $255,111.

“The bond will give us the resources we need to make sure all students are equipped with what they need to grow and develop in a safe learning environment,” FBISD board President Jason Burdine said. “Our business is and has always been educating children, and we need our community to see the value in investing in the future.”

Approximately $799.86 million is earmarked for construction, including rebuilding Meadows and Lakeview elementary schools, constructing classroom additions for Neill and Madden elementary schools and providing funding for five future campuses, according to district documents.

“The district isn’t built out yet, and we have places that are just overcrowded,” Jacobson said. “The projections show certain areas—like along [the Grand Parkway]—that with all the potential land there for development, it’s just going to increase.”

The district is anticipated to reach build-out in 2027-28 with student enrollment reaching 85,700 in that time period, Bassett said. Current enrollment totals 75,773 as of May 31.

Committee Member Orjanel Lewis said the bond is a necessity if the district is to provide quality education for students.

“I think our children will suffer without it,” Lewis said. “I think that we’ll be behind in growth. I think that, inevitably, we may end up losing students [to other districts and schools] … That’s an issue. We need to be reclaiming our kids, and we need to be looking to add more kids.”

Demographic research firm Population and Survey Analysts reported in June that over 8,000 students living within FBISD receive their education elsewhere, such as private and charter schools.

“Students all over the world are learning in a completely new way, and we must remain competitive so our FBISD students can become leaders in our local and global economies,” Burdine said.

While other districts, such as Katy and Cy-Fair ISDs, have authorized bonds in excess of $1 billion in a 14-year period from 2005-18, FBISD has underinvested in its facilities, Bassett said.

“Fiscal responsibility has remained a high priority for the board along with a thorough process to ensure we address our needs and not our wants,” Burdine said.

Without the bond program, there will be significantly less funding for the capital plan, and some projects, including new schools and building repairs, may not be viable anymore, board trustee Jim Rice said.

“It’s just like [maintaining] a house,” Rice said. “You’ve got to put money into your house every so often or it begins to degrade.”

A school district typically passes a bond every  three to four years, Bassett said. However, following a successful bond election in 2007, residents saw an economic downturn and slower growth within the district. Additionally, between 2007-14, there was a high turnover rate among administrative staff and board trustees, reflecting instability in the district, he said.

“Unfortunately, we skipped a bond cycle that hurt us greatly, and we now have to step up and invest in our system,” Burdine said.

In preparation for the 2014 bond program, FBISD administrators identified $1 billion worth of needs; however, the final proposal totaled only $484 million because there was a fear voters would not agree to a $1 billion bond, Rice said. The bond passed, but the school district is essentially playing catch up because of the reduced proposal, he said.

There is a general shift in responsibility from the state to local taxpayers—something many other Texas school districts are experiencing, Bassett said.

“It’s been within the past 10-15 years, as money has gotten tighter and the state allocation has gone down over time—in terms of what percentage share they’ve been contributing—that you’ve seen more and more districts using bonds to fund things like vehicles and technology and buses and things like that, which used to regularly be funded out of the general fund,” he said.

The percentage of state funding received by FBISD has decreased over the past decade, decreasing from nearly 44 percent to 30.5 percent, according to TEA district financial reports.

“The main cause of that is the fact we’ve had higher property values,” Bassett said. “As our property values grow, the state’s share of overall cost to educate a student goes down.”

School finance reform is a need because the existing funding formula is ineffective, said state Rep. Rick Miller, R-Sugar Land. Several leaders of school districts have expressed dissatisfaction over the basic allotment received from the state.

Miller said the next legislative session, set to begin in January, will likely see extensive discussion on the topic of school finance as House Bill 21, passed in 2017, created the Texas Commission on Public School Finance to study the existing system and recommend improvements. The commission is expected to deliver its report of findings and recommendations to the state Legislature by Dec. 31, according to HB 21.

Miller said he will continue to meet with education leaders from FBISD and Lamar CISD and consider their concerns as he goes into the next session.

“What I hope the Legislature will do is two things: One, help provide a stable funding source and two, honor and respect the jobs that our teachers do,” Rice said. “That, I believe, is America’s best hope for the future as we go forward—our public schools.”