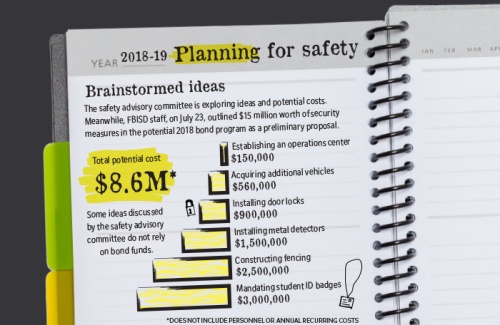 Recent reports of school shootings across the nation have prompted discussions about safety from Fort Bend ISD and local leaders of higher education. In response, FBISD’s board of trustees has appointed an advisory committee tasked with presenting ideas in August for improving security districtwide, such as student ID badges and door locks.

Leaders at local colleges and universities are providing resources and training opportunities for staff, and lawmakers said they plan to introduce legislation to help prevent violence in schools.

“No idea is off the table,” FBISD Police Chief David Rider said. “What we’re really focusing on here is preventive measures.”

The district typically sees an increase in terroristic threats after violent incidents like school shootings take place in other parts of the nation, Rider said. Terroristic threats denote intent to cause fear of severe bodily injury, reactions from emergency responders or disruptions to government entities and agencies school districts, according to the Texas Penal Code.

The number of threats received by FBISD increased nearly 137 percent from the 2013-14 school year to the 2017-18 school year, according to district data. FBISD monitors social media for threats, which may include false reports and those passed on from other districts.

“Students, for whatever reason, see the media buzz around a school shooting, and they end up posting things,” Rider said. “In social media, it can be shared around the world instantly, so somebody from our community picks that up, screenshots that picture and posts it on their feed. Now, somebody says they made a threat. Well, not necessarily, but we have to investigate all of those.”

Based on community feedback, there is a desire for additional training and education for both students and teachers, said Debbie Dunlap, co-chairwoman of the safety advisory committee.

Equipping students and personnel with information about emergency protocols and resources pertaining to suicide prevention, bullying and mental health can contribute to overall safety, Dunlap said.

“I think we’re seeing a big push to really focus on mental health—social, emotional health issues—and that was one of the first things that came forward in this process,” Rider said.

One idea is the implementation of a threat management program with a threat assessment team to review troubling student behavior, Rider said.

“As a team, they could discuss what was said or what was posted or what was done, what the behavior was,” he said. “We want to have a multidisciplinary team that can provide that child with resources.”

Once the committee presents recommendations in August, the board will vote on which ideas, if any, are appropriate for adoption.

“The challenge is that every district is different and there is no single solution to address all needs,” FBISD board President Jason Burdine said. “Fort Bend ISD cannot be added and/or included in this list of tragic events.”

Some safety projects may require funding from a potential 2018 bond program while others may be supported by the district’s general fund, Burdine said. The deadline to call for a bond referendum is Aug. 20.

“It’s my understanding that all the bond projects will be completed by August,” he said. “We’ve spent a lot of time and a lot of money and a lot of effort over the last bond cycle getting our schools to a place where they are as safe as they can be.”

June’s 2018 State of Higher Education conference in Sugar Land saw a similar discussion on safety among college and university leaders, including Jay Neal, associate vice president and chief operating officer for University of Houston at Sugar Land and UH Katy.

“If you look at the approaches of K-12 schools, you have active-shooter drills, which are extremely important because the younger people are dependent most of the time on their teachers to protect them,” Neal said at the conference. “We promote self-protection.”

To prepare students and staff for emergencies, the university police department offers a Citizens’ Response to Active-Shooter Events training, said Bret Collier, police lieutenant of the UH Police Department. Incidents such as the shootings in Parkland, Florida, and Santa Fe, Texas, tend to drive renewed interest.

With the expected addition of the new College of Technology building at UH-Sugar Land, which is expected to open in fall 2019, campus administrators are discussing anticipated needs, including additional personnel and infrastructure, Collier said. However, specific decisions have not been reached at this time.

“It starts with each one of us, and we have to be vigilant,” Sane said. “We have to stay on course, focusing on education, getting the training and following the path of nonviolence.”

It is a challenging issue to address, especially as schools have to prioritize quality education with safety needs when considering funding, she said. Also creating tension is the campus carry policy, which was implemented at HCC and other Texas community colleges on Aug. 1, 2017.

“Self-defense is everybody’s right, no doubt about that, but how we go about doing it—that’s the issue,” Sane said. “Strictly talking about educational entities, guns or any kind of weapons really don’t belong on the campuses ... When you want to learn something, you should learn with a free mind, not with fearful mind.”

“I’d also like to ban the assault-style weapons and high capacity magazines in Texas,” Reynolds said. “Another thing we could do in Texas is close the loopholes at gun shows.”

Unlicensed vendors do not require background checks, allowing buyers to bypass these safeguards and purchase firearms at gun shows or online, according to the Giffords Law Center to Prevent Gun Violence.

“I just think that we should have some parameters, so that we can limit these guns—because that’s a deadly weapon—from getting into the wrong hands,” Reynolds said.

Reynolds said he would also support a red flag law to allow law enforcement, a family member, school employee, or district attorney to petition for the removal of firearms from a potentially dangerous person. The idea was presented in Gov. Greg Abbott’s School and Firearm Safety Action Plan, which he unveiled in May.

The plan included 40 recommendations, including provisions regarding mental health for students.

State Rep. Rick Miller, R-Sugar Land, said he supports Abbott’s goal to make schools safer, and he advocates for more research on neurobiology and the effects of trauma, which may lead to violent actions.

“I plan to introduce legislation that will focus on training for teachers, counselors and staff members in the areas of trauma and trauma-informed care,” Miller said. “The impact of trauma on the lives and minds of a child [is] often severe and causes behavioral issues that might lead to ‘kids killing kids.’ ... The brain and the mind control the decision to kill before any weapon is ever picked up and used.”

While mental illness and trauma may influence behavior, such diagnoses are not precise indicators of whether an individual is likely to commit violence, said Glenn Urbach, executive director of the National Alliance of Mental Illness Greater Houston.

“In terms of major incidents, yes, some of the people that have been perpetrators include people with mental health challenges, but that’s not the rule, that really is the exception,” Urbach said.

“I think it’s about prioritizing,” Reynolds said. “I think we may have to cut in another area in order to do this, but I think when you balance public safety, that comes at a premium.”
SHARE THIS STORY