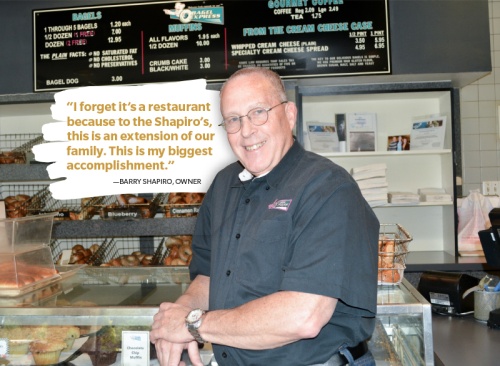 When Barry Shapiro started Bagel Express, he said it was “bashert,” meaning “meant to be” in Yiddish. He built out the space in nine weeks, and the New York-style bakery and delicatessen opened with two other employees in November 1993.

It was the first business to open in First Colony Market Place at Austin Parkway and Hwy. 6, and 25 years later it is still there. Over the years Shapiro has employed over 20 people. He now has 12 employees.

“I love our customers and our employees. They are the face of the store,” he said. “I am so proud of Bagel Express and its contribution to the community.”

Bagel Express stocks more than a dozen types of bagels and seven different cream cheese flavors, along with assorted muffins and pastries, all made in-house.

For lunch the store serves sandwiches with assorted meats as well as salads, wraps and platters.

Just prior to opening Bagel Express, Shapiro worked six months for free at a New Jersey bagel shop to learn everything about running a bagel business.

Chances are, most people in the Houston area have sampled a Bagel Express creation without ever knowing it. Shapiro started a wholesale business shortly after opening Bagel Express and had his creations sold in stores including Rice Epicurean Markets, Fiesta Mart, Kroger, Whole Foods and Central Market.

“We don’t do wholesale as much, but we still provide bagels to a few large commercial bakers who sell them under their own brand,” he said.

Good food, camaraderie and treating employees and customers right is Shapiro’s mission. To the neighborhood children, he is “The Bagel Man,” and to the neighbors, he is family.

Over the years Shapiro said the restaurant has become a spot for customers to meet up and talk.

“I forget it’s a restaurant because to the Shapiros, this is an extension of our family,” he said. “It is my biggest accomplishment.”