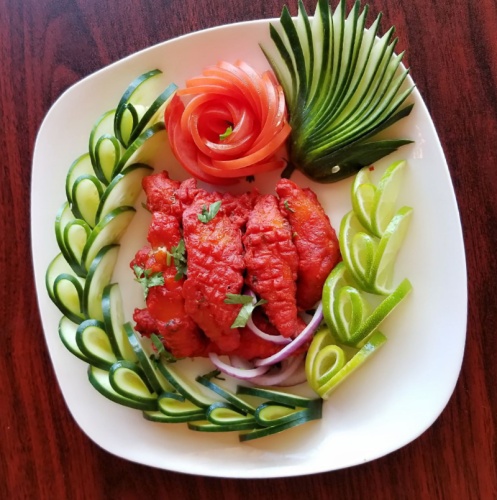 Amritsari Fish ($12.99): This popular dish from the city of Amritsar in Punjab, India, consists of fish pieces marinated in spices and deep fried.

The city of Sugar Land has a new restaurant inspired by the cuisine from the “City of Pearls,” Hyderabad, India. Neesha Dagla opened Biryani Bistro earlier this year to serve the food from the city she loves.

Neesha moved to Sugar Land with her husband, Raj, and their children from New Jersey four years ago. They drove around Sugar Land to scout locations for the restaurant she wanted to open.

“We were looking for places to go out to eat the kind of Indian food we like with a large group of friends,” Dagla said. “If the food was good, the place was too small. Or if it had the space, we didn’t like the food.”

She saw the space on Kensington Drive and knew it was the spot to launch her dream.

Dagla is an engineer by training, but stepped away from that career to focus full time on Biryani Bistro. The entrees on the menu are derived from Dagla’s own recipes. Her interpretations of Hyderabad classics feature fragrant, flavorful dishes—beginning with biryani, the signature dish from which the restaurant takes its name.

“Biryani is basically spices, meat and vegetables steamed into basmati rice for a couple of hours so that those flavors are in the rice,” Dagla said.

Typical biryani incorporates mutton, goat and chicken for the meat. The restaurant also serves vegetarian and seafood biryanis. Beyond favorites such as the Hyderabadi Mutton Dum Biryani and Chicken Tikka Biryani, eaters of all kinds will all find something to love.

For meat lovers, Chicken 65 is the most popular choice, Dagla said. The tender chicken pieces are seasoned with chili powder, turmeric, garlic and ginger. The explosion of fiery flavor makes it a guest favorite. Tandoori cauliflower is a tantalizing entree for vegetarians.

For those who can not decide, the restaurant provides a lunch buffet with an opportunity to try a few of the popular dishes at once.

Since opening in February, Biryani Bistro has hosted many gatherings, making Neesha’s days long, but worth every second.

“This is my baby,” she said, surveying the restaurant.