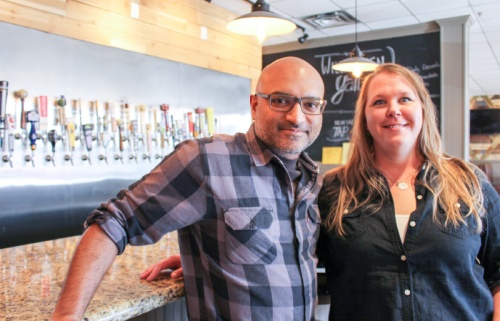 The restaurant’s soft opening took place in May, presenting menu items such as chicken-fried steak, pork schnitzel and Weihenstephaner hefeweissbier, a wheat beer from the oldest existing brewery in the world.

“The way that we describe our menu is it’s Texas comfort food and German food with a Texas twist,” Abraham said. “I can’t say that our German food is super authentic, but it is the way I grew up eating it.”

For example, some dishes feature ingredients often associated with South Texas flavors, such as poblano peppers and cumin seasoning, Abraham said. In addition to the food, the restaurant also features an extensive drinks menu with various wines and 30 beers on draft from German and Texas-based breweries—the city’s biggest selection of draft beer, she said.

Texas Biergarten began as a small operation out of the family kitchen, Abraham said. Since then, the couple has hired several additional employees, including chef James Tinkler, to help them run the 3,600-square-foot restaurant.

“I started cooking for a few neighbors just to have something to do, and that turned into our first business, which is a catering business called Cul-de-sac Cooking,” she said.

The restaurant has already amassed a steady following with familiar friends and neighbors visiting for catered orders, Laura said.

“It really is a benefit for the families and the ones who still come here today because they take the food, they go home and sit at their table and have something that was made from scratch and is very homemade,” she said.