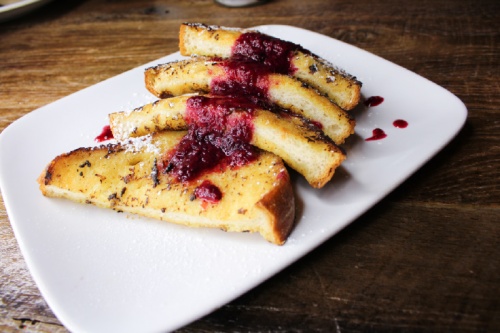 Vino & Vinyl is one of the Houston Restaurant Weeks locations in Sugar Land. Its creme brulee French toast features a moscato wild berry compote and syrup.

Although Fort Bend County resident Paul Killingsworth has been in the restaurant industry for 20 years, he only recently opened his own eatery with his wife, Nichole.

Vino & Vinyl opened in May 2015 in the Missouri City Township shopping center, Killingsworth said. It quickly became popular, so he opened a second location with a full kitchen in Sugar Land Town Square in March 2017.

“We were building something that was kind of catching on really fast,” he said. “We ended up having a really great opportunity to buy the space—basically with everything in it.”

A certified sommelier, Killingsworth said he wanted to open a place that combined his love for wine and music, making it approachable for everyone—including those who not drink wine.

“Wine is one of those things where it’s all about community and connecting people,” he said. “Think about it: We celebrate with it, we toast success with it, so it should never be something that makes people feel intimidated.”

Killingsworth also invites diners to browse through the restaurant’s collection of vinyl record albums and to bring their own to play in the restaurant.

“It’s a different experience to listen to [vinyl] because you’re putting the needle down and you’re listening to the entire album instead of skipping through [songs],” he said.

The Sugar Land location includes a full kitchen, allowing chef Luis Romero to come up with unique dishes to pair with wine offerings.

“We try to be creative as a team, but at the end of the day, [Romero] is really kind of the brain behind the food,” Killingsworth said. “He’s the best cook in Fort Bend County.”

A chef with almost 12 years of experience, Romero said he tries to keep the menu diverse, experimenting with flavors and incorporating influences from different regions—Latin America, France and Italy—as well as traditional American classics.

Killingsworth said he sees collectors buy bottles and records with no intention of opening either, but he does not believe in the same philosophy.

“When I die, I want to have no wine left and about 100 beat-up records,” he said. “Life’s too short not to experience it.”