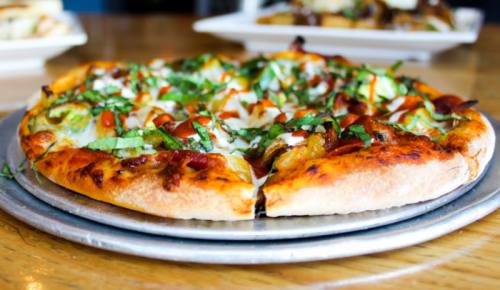 “Before [we opened Jupiter], we were known for fusion already,” Litwinenko said. “We wanted to do pizza only, but everybody expects something other than pizza from us. … The waffles idea was big at the moment.”

“Each one kind of runs itself,” Litwinenko said. “It’s like an individual unit. I like the way we have it set up because each one has a chef and a general manager, and they make all the decisions, basically.”

General Manager Jason Pena started with Japaneiro’s as a server, gradually working his way to become an indispensable part of Jupiter. Pena is charged with making sure the restaurant runs smoothly, interacting with customers, making important operational decisions and working with the chef on menu items.

Neither the owners nor Pena have formal culinary training, but Jupiter has received recognition for its food and service, Pena said. Part of what makes Jupiter successful is the attention paid to detail and the staff’s ability to listen to feedback while maintaining the restaurant’s own taste and brand, he said.

“We’ll start with something, and it’ll be completely different by the time it makes it to the menu because we took input from the customers,” Litwinenko said.

It is a system based largely on trial and error, he said. A pizza with Flaming Hot Cheetos proved unsuccessful, but the Ricky Bobby sandwich, referencing the 2006 comedy film “Talledega Nights: The Ballad of Ricky Bobby” starring Will Ferrell, features fried chicken and Texas toast and has been wildly popular with patrons.

The restaurant has amassed a following of regular customers, Litwinenko said. Many have inquired about plans to open locations outside of Sugar Land.

“We’re not against that idea,” he said. “We would have to find the right place, the right market.”

For now, the focus is on developing new ideas and serving food in fun, unique ways, Litwinenko said.

“There’s always something brewing,” he said.