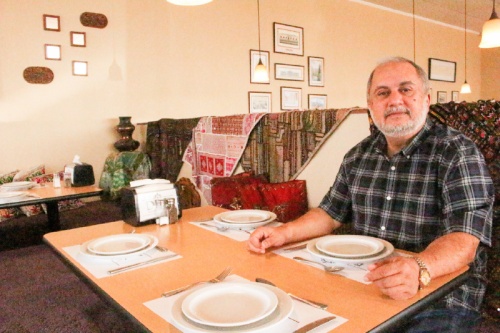 Instead of celebrating his 52nd birthday with friends and family, Muhammad Fareed Dhaduk spent Aug. 22, 2014 cooking and serving customers at his restaurant, DDK Kabab & Grill, which opened for the first time.

Since its opening, DDK Kabab & Grill has been serving traditional dishes of India and Pakistan with regional recipes and spices, including various curries and kababs.

Dhaduk, the restaurant’s chef and owner, once ran a garment factory and produced jeans for companies, such as Sears Holdings Corp. and The Gap Inc. However, he decided to branch out and pursue his greatest passion: cooking.

In 2011, Dhaduk opened his first two restaurants in Bahrain and London. Both restaurants remain open and are manned by his brothers, he said. Despite living in Sugar Land, Dhaduk has plans to expand his business into other foreign markets soon.

The idea to open an Indian-Pakistani restaurant began when Dhaduk was visiting family in the Greater Houston area, which lacked an authentic restaurant with quality food and the right ambiance, he said.

Although many of Dhaduk’s recipes come from his mother, he said he also learned from other mentors, including a chef in Karachi, Pakistan.

“That [mentor] was very famous at making this dish, nihari,” Dhaduk said. “I used to go every week and sit there for three, four hours.”

As a result, DDK Kabab & Grill’s nihari, which is a slow-cooked curry dish with specially seasoned beef, is the most popular item on the menu, he said.

“I let the food speak for itself,” he said.