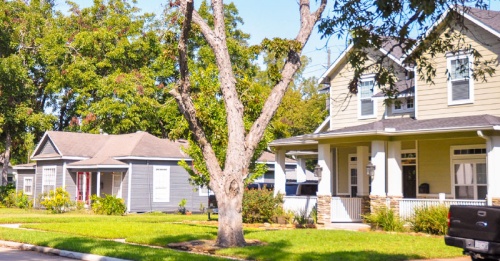 Some original homes in The Hill were built in the early 1900s to serve as housing for Imperial Sugar Factory workers.

Terry Nirider, a 30-year Sugar Land resident and two-year resident of The Hill, purchased a home in the historic neighborhood with the intent of remodeling, she said. She also moved to the area for amenities like Imperial Market, a project that has yet to break ground.

“I personally was one of those that bought expecting that [Imperial Market] was going to be done,” Nirider said. “I redid a home, so I personally am hoping that the value of the homes will continue to increase and that development would encourage that.”

According to the Fort Bend County Appraisal District, the average property value in The Hill is $250,900, resulting in annual taxes of roughly $5,200 for the average resident.

“A lot of our residents on The Hill have voiced their concerns about the taxes, and what we have concluded is it’s going to happen,” Nirider said. “Home values are going to go up. The homes are going to get bigger, so there’s really not any way to avoid that. I think really that’s pretty much the same situation with the Imperial development. It’s going to improve the neighborhood, but it just is what it is.”

Alina Rogers, a broker with Sparrow Realty, said there were two homes for sale in The Hill as of Feb. 15, and an additional two homes were sold within the last six months.

“People on The Hill are very protective of their neighborhood the way it is, and they have very strong feelings, so we’ve gone out of our way to make sure that they all understand the city isn’t trying to force anything on them,” Nirider said. “All we’re trying to do right now is find out what they want, and once they have that answer, how much are they willing to do to do that?”

In the early 1900s, The Hill neighborhood in Sugar Land served as housing for Imperial Sugar Factory workers and their families.

During Sugar Land’s company town days, everything from housing to medical care was provided to employees of the Imperial Sugar Company, according to city documents. In 1958, the company began selling homes in The Hill, giving employees priority for purchasing their homes.

In August 2018—about 100 years after the homes were built—a committee of neighborhood residents and property owners began meeting with city officials to create a vision for redevelopment for the homes located from First to Sixth streets and along Main Street near the iconic old sugar factory site.

Throughout this process, both city officials and the neighborhood committee have worked to gain as much resident feedback as possible.

The lots in The Hill vary in width, and there is no formal subdivision of land other than original deeds, according to the city of Sugar Land. Nirider, who chairs the committee, said some homes are being bought, demolished and rebuilt.

“We have no restrictions out here other than just very basic ones,” Nirider said. “People can build any kind of house they wanted. So, if the people in the neighborhood wanted to do anything to maintain the existing character, now is the time.”

According to the city, there are some original homes from the early 1900s still in place. Some homes have been passed down for generations, Nirider said. However, over the years as people have been purchasing the homes and tearing them down, they have been rebuilding larger homes on the land.

“There were a record number of homes in The Hill that were being torn down, and new homes being built,” Nirider said. “It was just more than had been historically happening.”

The committee met Feb. 13 with city staff in a closed meeting to review surveys and feedback collected from residents. Following the meeting, Nirider said the committee is aiming to have a plan for redevelopment ready by May after doing some more research.