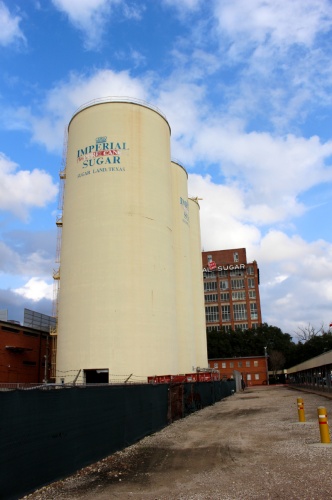 The 26 acres overseen by developers Geoffrey Jones and James Murnane that encompass the silos and Imperial Sugar building will be transformed into a mixed-use destination, complete with dining, shopping and lodging options, Jones said.

“The success or failure of a project like this depends on your tenant mix,” Jones said. “What we are in the process of doing is piecing together a tenant mix that will demographically appeal to a wide variety of people.”

The city of Sugar Land has been working to repurpose the old Imperial Sugar refinery site since production ceased on the premises in 2003, City Manager Allen Bogard said.

Although the project has been a priority, some factors, such as the Great Recession of 2008, environmental remediation, land-use approval and contract negotiations slowed the process down, Bogard said.

Jones said it is not unusual for slowdowns to occur with projects like redeveloping the refinery, adding there was nothing abnormal about the delays associated with the development.

“With a project like this, they are so complex that it’s not at all unusual—and it was the case here—for it to take years for these types of projects, from the date that they’re first conceived until the date that you start construction,” Jones said.

Jones and Murnane, along with property investor the Hunton Group, have been working with the city of Sugar Land on plans for Imperial Market for nearly four years. Although the developers took over the project after the Great Recession, it has taken that long to get to this point, Jones said.

“Physically, it doesn’t necessarily take any longer to develop a project like this when you’re preserving existing buildings, but there are certain things that you need to do from an administrative point because you’re bringing other parties [like] historical commissions into the process,” Jones said.

Due to updated building codes and environmental standards, asbestos had to be removed from the existing refinery structures, Bogard said.

Additionally, further plans for the Alamo Drafthouse Cinema, which was initially announced as a major tenant in December 2015, were revealed during a Jan. 2 City Council meeting. The cinema will have 10 screens and 1,100 luxury seats, Alamo Drafthouse officials said.

Since the economy has improved, Sugar Land officials feel the time is right to move forward with the project. City staff have also been working on gaining necessary permits and completing plans, Assistant City Manager Jennifer May said.

“It’s just a lot of coordination on everything,” May said. “Those projects are so incredibly complex from just having to do regulatory things like planning and street dedication; taking what was a private industrial site and making it into a mixed-use project has a lot of steps.”

Imperial Sugar got its start in 1843 on the Oakland Plantation in what is now Sugar Land, according to the company’s history.

The refinery has been located in Sugar Land for over 150 years, and, although sugar is no longer produced in the city, the company is headquartered in Sugar Land, Bogard said.

“I think that the Imperial refinery site represents the beginnings of our city and the heart of Sugar Land,” he said. “It is what everyone thinks of when they think of Sugar Land.”

Jones and Murnane plan to preserve the refinery’s history as much as possible. Historically significant landmarks on the property include the Char House—which will be turned into a boutique hotel—as well as an engineering building, three-bay warehouse, container warehouse, silos and smokestacks.

“In addition to preserving those buildings, we will be interspersing additional buildings that carry through with the same architectural language,” Jones said.

In an effort to preserve the pre-existing structures, the bottom portion of each of the three silos, which are about 2,000 square feet each, will be restored to house restaurants, Jones said.

“We want to retain every bit of the character that’s established by the buildings themselves and build off of that,” Jones said.

By preserving Imperial’s history, Bogard predicts the development will become a major activity center and generate economic growth within the city.


The future of Imperial

Jones and Murnane estimate construction on Imperial Market will be complete by fall 2019.

As construction gets underway in spring 2018, community staples like the Farmers Market at Imperial will have to relocate. Keri Schmidt, Fort Bend Chamber of Commerce president, said in early December the farmers market will remain located at the old refinery site until further notice. However, after reaching an agreement with the city of Sugar Land, the market will temporarily relocate to Imperial Park Recreation Center at 234 Matlage Way, Sugar Land, starting Jan. 13.

“They are aware that it is extremely difficult for us to do everything that we need to do once construction begins,” Jones said.

Once Imperial Market is redeveloped, not only will the old historical sites be repurposed, but new developments will be incorporated into the site as well. Of the 26 acres Jones and Murnane are working with, 4 acres were sold to Sueba Construction for the development of a premier multifamily community, Jones said.

Of the nearly 700 acres the area encompasses, Imperial is made up of several projects, Bogard said. Constellation Field, residential developments and Imperial Market are a few of the large projects that make up the community, May said.

“It is a master-planned community, so it’s not being done hodge-podge,” she said.

Once construction is complete at Imperial Market, approximately 2,000 full-time and part-time jobs will be created, Jones said.

“We’ve been working very closely with the city of Sugar Land since the very beginning 3.5 years ago,” Jones said. “We could not ask for a more cooperative governmental or legislative body to work with.”