State transfers prisoners who have been treated for the coronavirus to Jester 1 Unit in Richmond, igniting debate with Fort Bend County judge

Texas has transferred 35 prisoners who have been treated for the coronavirus to the Jester 1 Unit in Richmond. (Courtesy Pexels)

The Texas Department of Criminal Justice has begun the process of transferring offenders who have been previously hospitalized due to the coronavirus to the Jester 1 Unit in Richmond, according to TDCJ Director of Communications Jeremy Desel.

“It makes more since from a health care perspective for them to have a place that they can step down to, as opposed to just diving back into the general population somewhere,” Desel said.

“I was shocked to find out that the State of Texas has been using Fort Bend County as a dumping ground for convicted criminals with coronavirus,” George said in the statement. “The State didn’t tell me until after it had begun the process of transferring prisoners who are positive for COVID-19 to the Jester State Prison in Richmond. It’s outrageous that state officials would jeopardize the health and safety of Fort Bend County citizens, who have sacrificed so much to flatten the curve, by sending all of their sick prisoners here.”

In an interview with Community Impact Newspaper, Desel called the judge’s statement “ridiculous.” He said the TDCJ has been in contact with the judge’s office and George was informed before any transfers began.

When contacted for further clarification as to when the county was notified about the transfers, George's chief of staff Taral Patel said they recieved a "heads up" on April 24.

Additionally, Desel said it is not possible for the state to send all 1,050 offenders who have tested positive for the virus to the Jester 1 Unit. He did say the state will continue to transfer prisoners who have been treated for the coronavirus to Jester 1. Jester 1, which is typically used as a drug rehabilitation facility, can house approximately 200 inmates, Desel said.

In his statement George said he is concerned the TDCJ’s actions are putting Fort Bend County residents at risk.

“I asked [TDCJ] what prevention measures the state put in place to protect our innocent citizens who work at the prison and live in the community,” George said in the release. “I was told that, after the prisoners are dropped off at Jester, they are supposedly being quarantined inside the prison for 14 days to prevent the virus from spreading. The official told me that the prison employees are screened for symptoms such as fever and required to wear masks inside the unit. Well, those are dangerously insufficient standards for the close and confined quarters in a prison.”

Desel said anyone in contact with offenders at the Jester 1 Unit is wearing full personal protective equipment to be safe, but all of the inmates at the facility have been medically discharged from a hospital.

“I don't believe there is anyone that can 100% say when someone is or isn’t contagious, per se,” Desel said.

TDCJ has transferred prisoners who have been infected with the coronavirus to units across the state so they have better access to health care, which also happened in nearby Brazoria County, Desel said. He also said offenders who have tested positive for the coronavirus are not put in units that do not have a positive case already.

“Everything in our protocol is to stop the spread of this virus in the best ways that we possibly can,” Desel said. “If you look at the statistics, we’re doing a pretty darn good job at that. Our case count per thousand is lower than any other number of states with less population of offenders than we have.”

The TDCJ is responsible for 138,000 inmates, of which 1,050 have tested positive for the coronavirus.

Read George’s full statement, which urges residents to contact their state legislators to reverse the TDCJ's action, below. 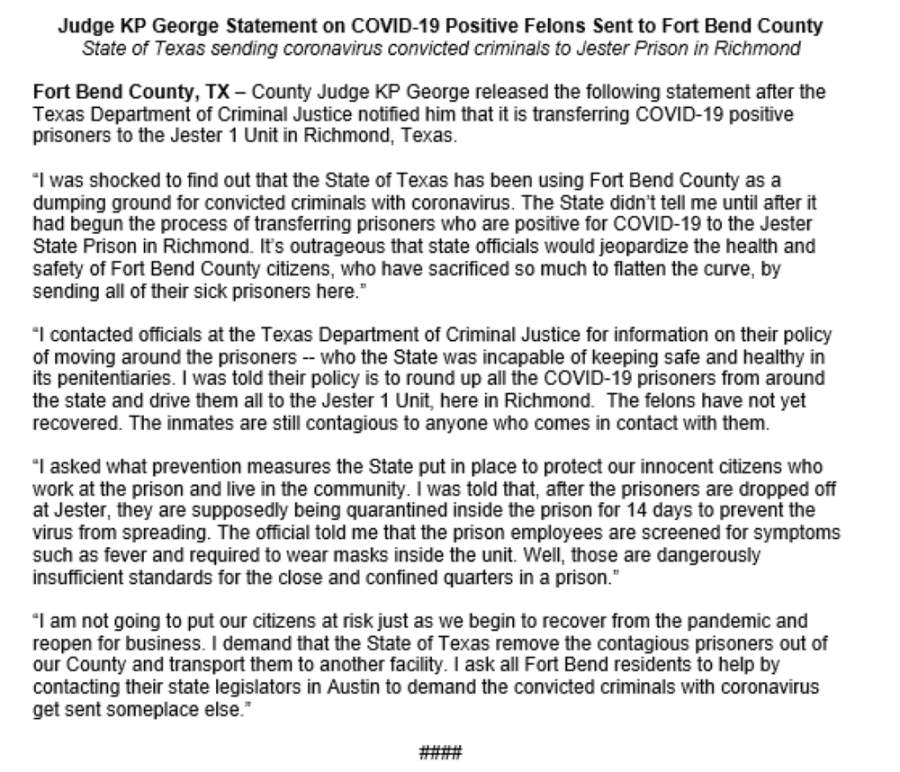