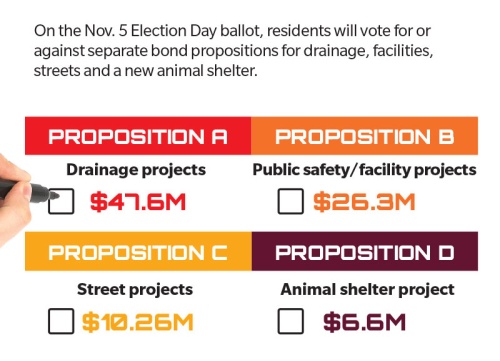 Sugar Land residents will be asked to decide if they are for or against four bond propositions totaling $90.76 million on the Nov. 5 election ballot relating to drainage, facilities, streets and a new animal shelter.

“In going through the budget process, even though we knew that we had these projects available, this came about very quickly,” Mayor Joe Zimmerman said. “We looked at doing this in May, but I felt very strongly about doing it in November so it didn’t get messed up in the politics in May of next year.”

Should voters approve all four propositions, the projects—20 total—will be implemented from 2021-23, Sugar Land Assistant City Manager Chris Steubing said. Construction on some projects might roll into 2024, but all projects would be underway, he said.

“All these projects are community interests and needs,” Steubing said. “We’ve heard from the community on every one of these areas, just about, through our citizen satisfaction survey or through impacted properties from flood events or through our volunteers and animal advocates.”

Residents will also see a $0.03 tax rate increase in fiscal year 2021 if all bond propositions pass, Steubing said. The city will be transitioning to facilitating more regular bonds that would go before voters for approval; however, these will not all require a tax rate increase, he said.

“Moving forward, if we’re going to do this and voters support it, we’re initiating the tax rate,” Steubing said.

The new 17,000-square-foot animal shelter, garnering a standalone proposition, will cost $6.6 million. The existing animal shelter was identified in the city’s 2015 Facilities Master Plan as exceeding capacity, according to city documents.

The new animal shelter, if approved, would be able to house 70 dogs and 132 cats, said Susan Chapman, a member of Sugar Land’s Animal Advisory Board.

“We’ve met with a consultant and looked at the current capacity versus the projected future capacity of the shelter and really kind of broke that down and looked at going forward what would be the needs to continue to provide the same level of service, but for the increased capacity. That’s the basis of the project,” Chapman said.

In addition to the $6.6 million project, animal shelter staff would also plan to implement a capital campaign to pay for things such as educational programs and other programs that would add value to what the shelter provides, she said.

“The capital campaign would give the community an opportunity to donate for some things that would go a little bit above and beyond—things that really are still needed but are not necessarily what they have now,” Chapman said.

The city will be able to basically provide the bare bones of the facility if the bond proposition passes, she said.

“What the city can deliver for the $6.6 [million] is basically the building to supply the current service that we do but in the right size of a building, so enough kennels, enough space for cats, staff space and everything else. They’re kind of cramped with the current look,” Steubing said.

Aside from the animal shelter project, drainage will account for the lion’s share of the over $90 million in bond propositions on the ballot with $47.6 million earmarked.

Although Steubing said he is proud of the drainage progress the city has made, there is more to be done following events such as Hurricane Harvey in 2017 and the most recent May 7 flooding event.

“We’ve got these hot spots, and we’re going to take care of our residents,” he said. “We don’t want to, you know, turn a blind eye or deaf ears. We want to make sure that we’re addressing their needs.”

Facilities projects, relating to public safety, account for $26.3 million. Constructing an emergency operations center and public safety dispatch building will cost $11.5 million, the most of the four projects in this category.

Streets account for $10.26 million and include several road improvements and rehabilitation.

“Public safety is something we always hear about through our citizen satisfaction survey, and transportation, of course, as always, is a big deal,” Steubing said. “Any road improvements and congestion mitigation we can do is always what we hear is at the top of our list, I think every year, through our satisfaction survey.”

As some park bond projects were in the process of being implemented, Hurricane Harvey hit Southeast Texas in 2017, causing priorities to shift. Additionally, some erosion along the Brazos River caused concern for some projects that would be running too close to the river, according to city staff.

In planning for the fiscal year 2019-20 budget, Director of Finance Jennifer Brown said during an Aug. 20 City Council meeting the city will issue certificates of obligation bonds to fund capital improvement program projects that are prioritized for 2020. These include some parks bond projects.

In the future, residents can expect more cyclical general obligation bonds up for voter approval to occur in Sugar Land, Steubing said.

Steubing said the city looked to Pearland and League City as well as some North Texas cities that post general obligation bonds on a more regular basis.

Residents will be asked to vote for or against each of the four bond propositions on the Nov. 5 ballot. Early voting in Fort Bend County will run from Oct. 21-Nov. 1, and registered voters can cast their ballot at any voting center as long as they present a valid form of identification.

“This is a transition period for Sugar Land in the way we’re formulating and developing our [capital improvement programs],” Steubing said. “It keeps our tax rate below about $0.35, if everything is approved. We felt that put us in a really good position as a community, and to fast forward six or seven years of projects into three years can kind of get us caught up on especially what we’ve heard from the drainage side.”