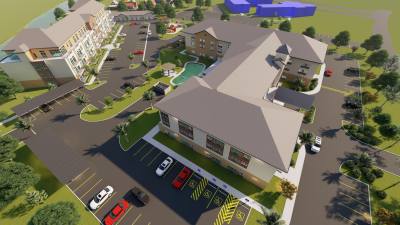 Rendering of the proposed CCRC/Cartwright Senior Living Community to be built in Missouri City.

The developer of a proposed Missouri City independent and assisted living facility will get another chance to make an impression on neighbors living in the nearby Lakes at Brightwater subdivision.

Homeowners from the community at Cartwright Road and Brightwater Drive packed Missouri City Council chambers for the Aug. 14 Planning & Zoning Commission meeting, many in opposition to the development, which they say will result in more traffic and is too dense for a single-family area.

Proposed plans call for STOA to purchase a 5.5-acre tract of land from Southminster Presbyterian Church and construct 72 units of independent living and 142 units of assisted living with a memory care component.

STOA held a meeting with the Lakes at Brightwater homeowner’s association in June to present its plans. Brodbeck told commissioners that STOA took resident concerns, as well as Missouri City staff recommendations, into consideration when amending its plans.

Commissioners were tasked with voting to rezone the land to a PD—Planned Development District—to allow for the unified development of the independent living and assisted living facilities. PD designations, according to the city, are for “complex mixed-use projects where typical zoning restrictions will not allow the highest and best use for the property and where the property owner and the city desire to establish site-specific criteria that will govern development and use of the property."

Nearly a dozen people addressed the commission, including 28-year Lakes of Brighwater resident Tom Simon, who said the HOA had enough money to purchase the land, but when the HOA met with Southminster’s real estate team, that option was never discussed.

Diane Mauricio spoke on behalf of the HOA and said residents were concerned about additional traffic on Brightwater Drive. Other nearby independent living facilities, such as The Huntington at Missouri City, were off of a major road—Murphy Road, in Huntington’s case—that could handle more traffic.

“Murphy can handle the flow,” Mauricio said. “Residents know there is already not a lot of space, and sometimes you have to wait through a light to exit the community.”

Southminster’s Senior Pastor Rev. Kent Landry said the land the church is selling had a special permit for a soccer field and playground, but was not actually a public park or green space for use by Lakes at Brightwater residents, even though it is used as such.

“Unfortunately, our church and school has struggled over the years … and we put the property on the market to pay off our debt and give the church a shot in the arm with [a] new ministry,” Landry said. “We are very excited to have new neighbors we can care for and pray for, and help our children learn what it means to respect their elders and establish a special bond. Frankly, we don’t want another half-filled strip center along Cartwright.”

The Planning and Zoning Commission motion to move the project forward to City Council failed. However, Brodbeck said STOA is able to go in front of the commission again for a second reading.

In anticipation of the next meeting, she said STOA is rethinking the property and how it will look.

“We are still working everything out,” she said. “We want to work with the community, so we may make significant changes or we may not, but we are trying to find a compromise.”
SHARE THIS STORY

Check out the 5 latest commercial permits filed in Sugar Land and Missouri City, including a renovated T-Mobile

6 events to attend in Sugar Land and Missouri City this weekend, Nov. 26-28