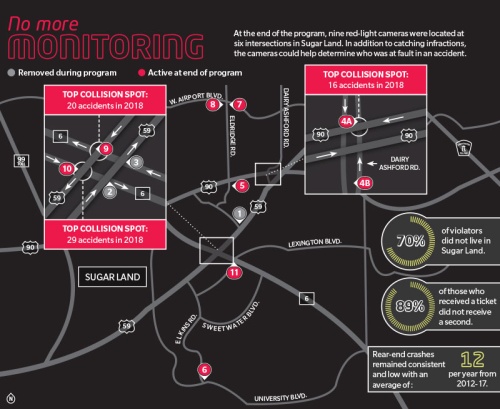 By now, drivers in Sugar Land may have noticed red-light cameras and signage have been removed from six busy intersections within the city.

“We used these cameras as a tool to help us out,” Sugar Land Police Chief Eric Robins said. “When we had the cameras, we were hoping to get a lot more compliance and people not running those red lights and not having those accidents.”

Robins said he anticipates needing more staff over the next couple of years to make up for the loss of the cameras.

“That was set aside to pay for other traffic safety programs,” Robins said.

Before HB 1631 was passed, when a driver ran a traffic signal equipped with a red-light camera, the vehicle owner whose name was associated with the car’s license plate number would have been mailed a notice of a $75 fine. Of this $75, $37.50 went to the state of Texas into the trauma fund for hospitals, Sugar Land Mayor Joe Zimmerman said during a June 18 City Council meeting.

“[The state] now has to make up that shortfall in revenue,” Zimmerman said.

The city retained the remaining $37.50. Throughout the 11-year duration of the program, the city received a total of $6.1 million. Each year, the net share of revenue produced by red-light cameras accounted for about 1% of the city’s general fund operating budget, Robins said.

“I’ve received a lot of emails about some people accusing us of using this as a revenue source, which is laughable,” Zimmerman said.

State Rep. Ron Reynolds, D-Missouri City, who co-authored HB 1631, said he supports the ban because it would prevent cities from being incentivized to issue tickets to increase revenues. Reynolds added it was difficult to enforce ticket payment.

“Studies also showed that red-light cameras do not necessarily end the practice of running red lights, as individuals still run them and then never pay the ticket,” he said. “Since there is not a strong payment enforcement system, the cameras do not have the desired deterrent effect.”

Roughly 23% of violations issued in Sugar Land throughout the program’s duration remained unpaid as of June 1. Under HB 1631, outstanding violation fees are no longer being collected, Robins said. In fact, any payments that were in the pipeline but had not been processed will be returned, Robins said.

In response to getting rid of the red-light cameras, Robins requested funds for one additional traffic officer be added to the fiscal year 2019-20 budget that council will adopt in September.

There are about four hours of rush-hour traffic each day—two hours in the morning and two hours in the evening—during which increased patrolling would be needed, Robins said.

“Those are the critical times that I’m in need of some support,” he said. “That equates to about three officers, when you add up the amount of time. It’s either that or trying to have our officers work extra overtime, and that can become a little bit of a burden.”

Robins said he will monitor the effect of having one additional officer in FY 2019-20 and look at accident data to determine if more officers will be needed.

“It’s always been about safety,” he said. “The way the funds went, the city and the police department basically used the funds that we got from the system to pay for the system itself.”

City Manager Allen Bogard said he feels legislative actions such as this one are making cities less safe.

“This is not the first action that has been taken,” Bogard said. “Two or three years ago, City Council adopted [an ordinance] where individuals were going to be ticketed if they had a phone in their hands while driving. The ordinance that our city passed had to be removed because of the Texas Legislature. Here, we have another one.”

In 2017, the Legislature did pass a measure banning texting while driving.

Sugar Land resident Atia Ibrahim said she received a violation notice from a red-light camera once, and she found the process to be easier and more understandable than being stopped by an officer on the road.

“It allowed me to see the picture,” Ibrahim said. “It’s actually a video showing me that I slowed down yet I didn’t stop. But when the police officer pulls you over, you just take their word for it.”

Ibrahim also said she felt safer knowing the cameras were there to review footage for red-light runs or accidents.

“I know the cameras were there for our safety. It’s not intrusion,” she said. “I don’t see cameras any different than having a police officer sitting there pointing a speeding gun at you to see how fast you’re going.”

However, in a Community Impact Newspaper poll on Nextdoor, 64% of 497 responders in the Sugar Land and Missouri City area voted in support of the ban.

“HB 1631 ends a harmful practice by prohibiting the use of red-light cameras, which deprive citizens of their due process rights,” Reynolds said in an email. “An individual is forced to face a camera, rather than an officer who was present at the scene, as their accuser and is presumed guilty until proven innocent.”

Reynolds also said he feels the loss of the cameras makes communities in Texas safer as studies have shown rear-end crashes increase with the red-light camera system.

“Rather than following the normal flow of traffic, drivers brake too quickly upon entering the intersection to avoid getting ticketed, leading to crashes,” he said.

However, in Sugar Land, an analysis of the red-light camera programs showed rear-end crash counts stayed low with an average of 12 per year between 2012-17.

Although the red-light cameras have been banned, and Sugar Land has complied, Robins said the city will continue to look at other ways technology could help the police department.

“We’re constantly looking at what’s out there and what can give us an edge to help keep our city safe,” he said.

Bogard said he hopes in future legislative sessions the city will be able to discuss these issues further.

“I hope that as time goes on, there’s going to be an opportunity for us to have more dialogue with the leadership in Austin and get them back on the team for helping local communities build safe communities because it’s not happening anymore,” Bogard said.