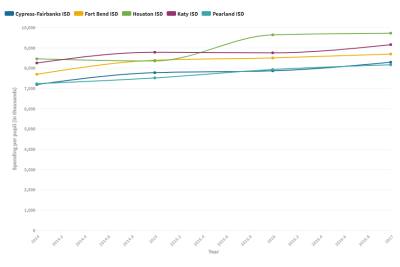 FBISD, along with Cypress-Fairbanks, Houston and Katy ISDs, is also listed as one of the largest 100 public school systems in the United States, ranked by enrollment.

For all 50 states and the District of Columbia, the amount spent per pupil for elementary and secondary education—prekindergarten through 12th grade—increased by 3.7% to $12,201 per pupil during the 2017 fiscal year, compared to $11,763 per pupil in 2016, the Census found.

The increase in spending in 2017 was due in part to an overall increase in revenue for school systems in the 50 states and the District of Columbia, according to the Census. In 2017, public elementary and secondary education revenue, from all sources, amounted to $694.1 billion, up 3.4% from $671.2 billion in 2016.

This data comes from the 2017 Annual Survey of School System Finances. The census said education finance data includes revenues, expenditures, debt,  and assets—cash and security holdings—of elementary to secondary public school systems. Statistics cover school systems in all states and include the District of Columbia. The statistics are not adjusted for cost-of-living differences between geographic areas.
SHARE THIS STORY

The expansion will increase ChampionX’s capacity to help customers with corrosion technology needs.

Fort Bend County EMS Chief Graig Temple said it would 'behoove' the county to have a major trauma center.

Currently under construction, the restaurant will be located near the intersection of Hwy. 59 and Airport Boulevard.

Fort Bend ISD board to interview superintendent candidates in August

The FBISD board of trustees unanimously approved an updated superintendent search calendar during its June 15 meeting.

Once selected, an executive search firm will aid the city as officials look for a city manager.

While the name and image have changed, the existing public transit services will continue to operate as an affordable, efficient and safe transportation option in Fort Bend County.

The center, which offers programs and activities for adults over 50, had been closed due to the coronavirus pandemic.