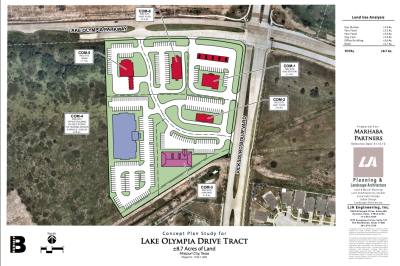 Updated 2:14 p.m., June 18: Missouri City City Council voted on June 17 to approve the rezoning of the future development at Lake Olympia Parkway and Vicksburg Boulevard to a Planned Development District.

A Missouri City retail development slated to include a convenience store and gas station is one step closer to fruition.

The city’s planning and zoning commission voted at its May meeting to rezone 8.68 acres at the southwest corner of Lake Olympia Parkway and Vicksburg Boulevard as a Planned Development District, or PD. A PD designation is for "complex mixed-use projects where typical zoning restrictions will not allow the highest and best use for the property and where the property owner and the city desire to establish site-specific criteria that will govern development and use of the property," according to the city. This would allow for the store to sell gasoline.

“My client believes the gas station is appropriate at this corner,” LJA Engineering Planner Katy Goodrich told the P&Z commission. “They brought this forward before and would like to see a gas station happen since there is [not] anything nearby for the people who live in this area or the homes being developed to the north.”

Goodrich said she was not able to say which gasoline company would be providing the service. She also said her client, Equity Trust Co., would be making the development visibly appealing and would also be providing sidewalks for pedestrian connectivity.

In addition to the gas station, plans for the corner submitted to the commission include fast-food restaurants, an office building, a bank and a day care.

Equity Trust has tried for a number of years to rezone the land, as the plan was designed back in 2004, David Lucyk of Marhaba Partners told Community Impact Newspaper. Marhaba Partners is one of the developers of the site. Missouri City announced public hearings in 2015 and 2017.

Some people did speak in opposition, including Sherri Gregg, a resident of nearby Olympia Estates, who told the commission she had several concerns related to living near a commercial development.

“My house is close, and I am concerned with the lighting situation—a gas station is bright,” Gregg said. “I am also worried about ozone levels from the gas, which are known to spread 200 feet. People walk around that area. There is also potential for crime. The other stores are fine; I am worried about the things related to a potential gas station.”

Joel Scott, who is involved in a competing development directly across Vicksburg from the site in question, told the commission the southwest corner was not ideal for a gas station.

Scott's development, which is already zoned as a PD, also plans on having a gas station.

“We are not opposed to the PD, but [we] are opposing the gasoline sales,” he said. “Purely from a business standpoint, the southeast corner makes the most sense. One convenience store should saturate market for quite some time.”

The site was passed on with a positive recommendation. It will go in front of Missouri City City Council for approval at a future meeting.
SHARE THIS STORY

The newly named Prosperity Drive is located in the Vicksburg subdivision, a neighborhood that contains a number of streets that bear names of Confederate generals.

Jivani and two others were selected to help address a backlog in court cases resulting from pandemic restrictions.

The measure is intended to help businesses continue to recover from the economic effects of the COVID-19 pandemic.

Owned by Sugar Land resident Noor Hermani, the shop offers a variety of treats and trinkets.