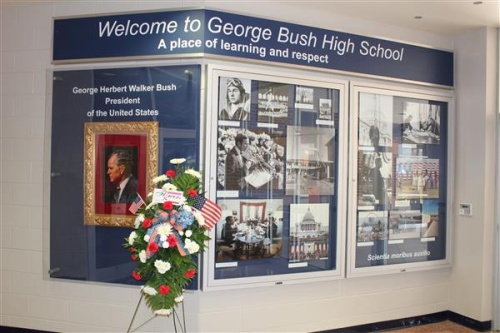 A George Bush memorial is seen at Bush High School.

George Bush High School in Richmond capped off a weeklong celebration of the life and legacy of former President George H.W. Bush with a campus parade Dec. 7.

The school's student council coordinated activities and tributes that began Dec. 3 with a moment of silence and viewing of a video titled, “Remembering our Namesake, George H. W. Bush.” Students also wrapped ribbon in patriotic colors around outside columns and placed a floral arrangement donated by Flowers by Adela near the dedication wall at the front of the school.

During a concert Dec. 4, the school’s orchestra performed two pieces to honor Bush, including “Rhosymedre” by British composer Ralph Vaughan Williams, and a brief playing of “America the Beautiful,” arranged by BHS Orchestra Director Brian Runnels.

To commemorate Bush’s love for socks, the orchestra wore colorful socks with their uniforms, and all students and staff wore patriotic colors and socks during the week.

On Dec. 5, the National Day of Mourning, 22 of the school’s Navy JROTC cadets took part in the arrival ceremony at Ellington Field, where they were among guests to welcome the President Bush's family as they returned from Washington, D.C., on Air Force One.

Bush High School Navy JROTC cadets were part of history as they attended the Arrival Ceremony for #Bush41 at Ellington Field yesterday. Bush HS will conclude its weeklong tribute to President Bush with a campus parade tomorrow afternoon. @BHS_Broncos pic.twitter.com/CXGuz60HwC

Finishing out the week, the student council arranged 41 tea lights down a hallway leading to a tribute table where students can pay their respects, decorated pillars in the school’s commons area with scrolls of Bush’s accomplishments, held a prayer vigil and led a parade.
SHARE THIS STORY