Local officials favor DNA testing of historic human remains; task force to plan for reinterment over the next six months 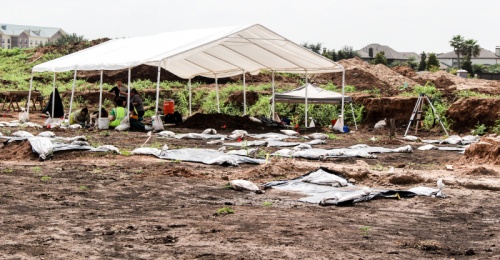 A task force of community members recommended in early September pursuing DNA testing of the human remains discovered earlier this year at the construction site of Fort Bend ISD’s new James Reese Career and Technical Education Center. The group will continue meeting over the next six months to discuss plans for reburial of the remains.

“Without DNA analysis, it is impossible to positively identify a single burial as an individual,” bioarchaeologist Catrina Whitley said.

DNA testing may even provide useful research and benefit the modern medical community, she said. However, the challenge with DNA testing is it involves destroying biological samples.

Workers uncovered the remains of 95 individuals who are believed to have been former convicts who were part of a prison labor system, according to FBISD officials. The city of Sugar Land and the school district have expressed a shared interest in relocating the remains to the existing Old Imperial Farm Cemetery at 6440 Easton Ave., Sugar Land, but it will be up to the court to sign off on plans for reinterment. At this point, there is no determined schedule or budget for such a process to take place.

“[The challenge] is making sure we’ve got all the stakeholders at the table and that we garner as much input as possible to make sure that what we’re doing is correct and meets everybody’s respects and creates a memorial out there that’s meaningful,” First Assistant City Manager Steve Griffith said.

The task force is composed of historians and representatives from state agencies and advocacy groups, Griffith said. Also part of the task force is historian Reginald Moore, president and founder of the Convict Leasing and Labor Project, formerly the Texas Slave Descendants Society. Moore was the first to alert the school district to the potential presence of a cemetery on the construction site.

Although archaeologists have completed the exhumation of the individuals, physical assessments are still underway, said Amanda Bubela, FBISD director of external communications and media relations.

At this point, researchers believe the majority are male, Bubela said. There may be one or two females, but further analysis would be needed to confirm.

Goshawk Environmental Consulting firm was contracted to supervise the process, and examinations of the exhumed remains is expected to be complete by the end of October, said Reign Clark, Goshawk’s cultural resources director.

The CTE center construction site belonged to Sugar Land historic figure Littleberry Ambrose Ellis, who along with his business partner Edward Cunningham, operated a prison on the property. Archival records name six individuals who died on that property, but it is unclear whether they are among those found at the site, Clark said.

“This entire project is being conducted under an antiquities permit, and therefore, the destructive analysis can only be granted by the Texas Historical Commission,” Clark said.

A rare genetic disorder causing carpal bones to fuse together has been discovered in five individuals, suggesting at least some were related, Whitley said. It may take up to a year to complete DNA analysis on every individual if THC approves the request, she said.

“The answer was, ‘We hear what you’re saying, but we don’t want to grant permission to do this until you’ve done a really thorough job of getting all stakeholder input before we allow you to destroy this material,’” Sopher said.

The task force and community members who attended the first meeting expressed overwhelming support for DNA testing to find out more about the lives of the deceased.

“We have an opportunity to put a name to these individuals,” Clark said. “The significance of the find is in the preservation of the bone material here. This is a completely unique situation, and to not do DNA analysis to learn about these individuals or the population—what they went through and what their families went through—would be a travesty.”

Records indicate the remains date circa 1878 to around 1910, Clark said. They were likely the part of a convict leasing program, which many consider an evolved form of slavery following the passage of the 13th Amendment.

“There is a rather large loophole in the 13th Amendment that allows the continued involuntary servitude of convicted individuals,” he said. “Truly, the [convict labor] system exploded with agriculture. The center of agricultural use of the convict labor system was this region of Fort Bend County and Brazoria County.”

“The worst work was in the sugar cane fields because it was the most difficult,” Kelly said. “It was hot and very labor-intensive—very difficult. It was very tough on you physically.”

Multiple labor camps of a similar nature existed across Texas with convicts working on railroads, in coal mines and in the field, he said.

“The system was full of abuses,” Clark said. “It was a private sector arrangement where an individual could obtain a group of individuals to do the work, and the oversight by the state was very minimal in a lot of situations.”

Preliminary assessments indicate some of these people had muscle mass so enlarged it was deforming bones, Whitley said.

“We’re still in the middle of [analysis], but it looks as though they may have been thrown into the labor camp being expected to perform labor they were not used to, and it is causing muscle tears, which is reflecting tears on the bone from being subjected to such heavy labor,” she said.

The discovery lets community members reconcile with the past and come together for a worthy cause, said Sam Collins III, a member of the National Trust of Historical Preservation and Convict Leasing and Labor Project adviser.

“What the city of Sugar Land needs to realize is what you have here is not a liability but an asset for the benefit of your city and the school district,” Collins said. “[See it] not as a potential cost and liability but how do we turn this into an opportunity for everyone to heal.”

An official interlocal agreement assigning all responsibilities and divvying reinterment costs still has to be approved by FBISD and the city entities Griffith said.

It is up to FBISD to file court petitions for removal and reburial; fund costs associated with storage, new burial vessels, transportation and reinterment; and obtain temporary markers for each grave, according to Sugar Land officials.

The construction site is active, and the James Reese CTE Center is expected to open in fall 2019 as scheduled, FBISD general counsel Robert Scamardo said.

“We would like to find a way to incorporate in the building a marker or designated area that lets visitors know about the historical significance of the land,” FBISD board President Jason Burdine said. “The educational aspect is very important to us.”

Moore said he and his organization should have oversight regarding decisions made for memorialization, advocating for proper burials with a space for reflection and learning.

“[My vision] is to have a monument up there that’ll represent [the deceased], tell their history there and along with the monument, have a museum representing them,” Moore said.

Although the court must approve FBISD’s request for reinterment, it would not set a time frame for that process, Scamardo said. Once permission has been granted and archaeologists have completed their work, reburials and commemoration can take place.

“We are committed to providing a dignified final resting place that is marked for these people who were lost from history,” Burdine said. “We are humbled to be a part of this discovery and to tell their story.”