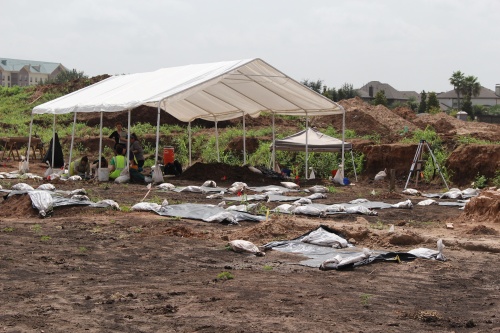 The action is the first step toward a formal agreement with FBISD that will establish specific details of the formal reburial of historical remains of prisoners discovered Feb. 19 in an unmarked grave on the property of the district’s future James Reese Career and Technical Education Center.

"The school district and the Texas Historical Commission have been working together and told us the cemetery was uncovered during construction activity," First Assistant City Manager Steve Griffith said in a release from the city. "The city of Sugar Land is an adjacent property owner, so we've closely monitored the ongoing developments and worked to establish a continued dialogue with all groups involved in the process."

City leaders recently organized a meeting with representatives of the Texas Slave Descendants Society—a group now called the Convict Leasing and Labor Project—to discuss preliminary plans for the relocation of the remains to the city's cemetery and conceptual ideas for enhancing and memorializing the cemetery. The city is also working with local activist Reginald Moore, who has an honorary cemetery guardian designation from the Texas Historical Commission and first alerted FBISD that a cemetery could be present on the property.

The land for reburial is owned by the city and was proactively acquired in 2006 to preserve and protect the Old Imperial Prison Farm Cemetery and surrounding land, according to the release. The property comprises just over 63 acres and has been designated as parkland.

The action taken by the city ensured that the cemetery would not suffer the same fate as many others throughout the country that have been neglected, forgotten and disappeared into history, according to the release.

"Just as we've worked hard to honor and protect those buried at the Old Imperial Prison Farm Cemetery, the city of Sugar Land has a common interest in ensuring that the remains discovered on the school district's property are memorialized with the utmost dignity and in a manner that honors their historical significance," Griffith said. "We look forward to facilitating a coordinated effort that achieves this purpose and sharing more specific details as we work toward a more formal agreement."

The city's cemetery contains the remains of prisoners and guards who died from 1912-42 at the Texas Department of Corrections' Central Prison Unit. For more information about the city's cemetery and efforts to preserve, protect and honor the area's past, click here.