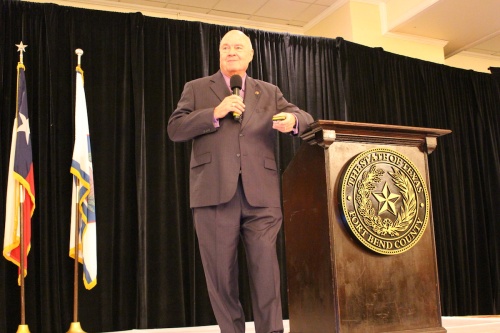 Fort Bend County Judge Robert Hebert discussed several highlights, concerns and future goals on the horizon for the growing area during the State of the County presentation March 29.

The county, with a population of 765,000 as of June 30, has experienced four declared presidential emergencies in the last three years, Hebert said.

"We came through them relatively unscathed, and it hasn't slowed down the growth of this county at all," Hebert said.

1) Hurricane Harvey Recovery
Fort Bend County received 22,800 registrations for individual assistance as a result of Hurricane Harvey, Hebert said. Of those, approximately 6,800 were for flooded homes, and the rest were for cars and other non-home items.

The county has identified 15 projects for the government to fund—one of which is erosion control in the vicinity of New Territory in Sugar Land, Hebert said. To fund these projects, the county has requested $88 million, Hebert said.

So far, about half of homes damaged during Harvey have been fully repaired, Hebert said.

3) Mobility
The county has several mobility projects planned, and several projects were completed in 2017 to address mobility needs, Hebert said.

Crabb River Road will also be under construction beginning in August, and construction at Hwy. 99 and Harlem Road is set to be complete in April. Williams Way Boulevard construction from Hwy. 59 to FM 762 will also wrap up in October.

Major projects under construction this year include the sheriff's administration office, a transportation center, an animal services facility expansion and a medical examiner office.

Restructuring the financing for public education could result in lower property taxes, Hebert said. If the state had increased its share to be a 50/50 partner in funding schools from 2016-19, local school property taxes could have been reduced by more than $17 billion, Hebert said.

A top priority is transitioning 2017 bond projects into right of way acquisition, design and construction schedules, Hebert said. The county will also begin initial planning for a future facilities bond election that may include the expansion and renovation of the Fort Bend Juvenile Detention Center, Emergency Operations Center and multipurpose facility at the county fairgrounds, among other projects, Hebert said.