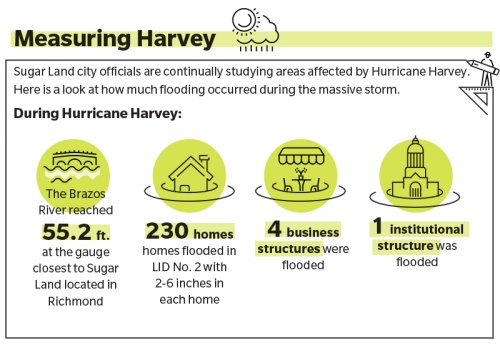 According to a release, the agreements are part of ongoing citywide efforts to ensure optimal performance of stormwater drainage infrastructure. Maintenance includes routine inspection, cleaning and replacement.

“Some of the potential solutions in the areas of the drainage studies include updating the stormwater system where there are identified deficiencies related to capacity or City Master Drainage Plan standards and replacing and adding additional inlets,” Sugar Land Senior Engineer Jorge Alba said. “In the areas located within Levee Improvement Districts, such as in Fort Bend County LID 2, the city has been coordinating with the LIDs for improvement projects.”

“The areas included in the drainage studies have experienced excessive ponding during the 2015 [and] 2016 major storm events,” Alba said. “However, before Harvey, no structural flooding has been observed in these areas.”

Additionally, a Brazos River erosion study is underway to survey critical areas of the river within the city. The scope of the study is to make predictions on bank erosion, perform analysis of risk and consequences and make recommendations on regulatory actions. The study is in conjunction with Fort Bend County’s Brazos River Erosion Management study, according to Assistant City Manager Chris Steubing.

Although no data has been released from the city’s study, officials have begun surveying areas of concern along the river banks, analyzing the consequences of bank failure and refining river movement projections, Alba said.

“[We] assisted Fort Bend County in developing a high-level scope and cost estimate projection for repairs to the river erosion within Fort Bend County and Sugar Land,” Alba said. “This led to a request for funding through the state and to Congress as a part of the disaster declaration funding that was a part of the most recent budget appropriations acted on in Washington, D.C.”