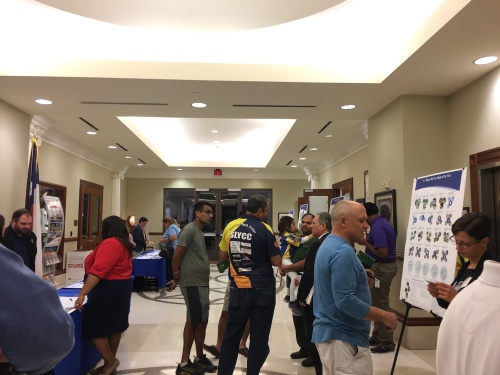 The Parks, Art, Recreation, Culture, and Streetscapes Board and the planning and zoning commission will review the updates and make separate recommendations to City Council in November and January, respectively, according to a preliminary schedule. Mayor and City Council will vote for approval in February 2018.

Approximately 95 percent of projects outlined from the 2005 Parks, Recreation, and Open Space Master Plan have been completed, said Joe Chesser, director of parks and recreation.

“Some of those projects include the Imperial Park Recreation Center, the renovation of the T.E. Harman Senior Center, Memorial Park, including Pawm Springs Dog Park, the Brindley Bike Trail, the Brazos River Park,” Chesser said. “Almost all the parks that you’ve seen built over the last 10 years or so reflected from that master plan.”

Staff and PARCS Board members have worked with consulting company Halff Associates, Inc. for over a year, assessing needs and putting together recommendations to the city’s PROSMP, Chesser said.

To gain feedback and input, staff and PARCS Board members surveyed and engaged with residents, including those from extraterritorial jurisdictions outside city limits and from the communities of Greatwood and New Territory.

Part of the process is conducting an analysis on the changing demographics of the city, which helps provide direction on the needs and demands of the community, Chesser said.

Many residents expressed interest in more indoor exercise and fitness facilities, nature trails for biking and hiking, natural areas and wildlife habitats, and areas for shade in parks, according to survey responses. The community also favored amenities, such as more outdoor festivals, adult fitness and wellness programs, and cultural events and programs.

On top of the needs defined by residents, the updates emphasize continual planning and development of parklands such as Brazos River Park, City Park, Imperial Park, and Gannoway Lake Park, as well as expanding space and programming of the T.E. Harman Senior Center.

Other recommendations include implementing recycling programs, establishing community gardens, allowing more food trucks access in parks and during events, increasing beautification efforts, and coordinating with school districts and HOAs to share resources and address parks and recreation needs in neighborhoods.