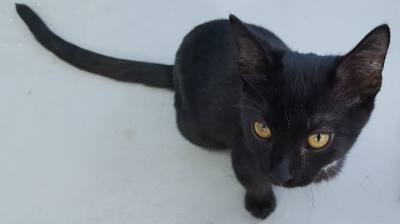 Families can read books to kittens and possibly adopt one from the Missouri City Animal Shelter as part of the shelter’s Meow Book Buddies program at Half Price Books in Sugar Land Saturday.

The program runs the first Saturday of every month and helps find homes for the cats, said Valeri Tolman, the shelter’s volunteer coordinator. The adoption fees drop from $25 to $10 as part of this event.

“[The kids] pick the kitten they want [to read to] and the book they want to read,” Tolman said. “There’s even a little tent they can go into.”

“We’ve actually had kittens adopted at these events,” Tolman said.

The popular program was put on hold last month due to Tropical Storm Harvey. One young boy missed attending the program so much that his mother brought him to the shelter, where staffers allowed him to read to the animals there, Tolman said.

Currently, the shelter has 16 animals available for adoption, Tolman said. All have received vaccinations for infections such as bordetella and distemper and are spayed and neutered, she said.

7 events in the Sugar Land, Missouri City area to check out this December, January

Check out these holiday events, concerts and light displays that will be happening in the Sugar Land and Missouri City area in the upcoming months.

The ranking was based on factors such as cost of living, schools, health care, recreation and weather, according to the Niche website.

The high school campus is expected to open ahead of the 2022-23 school year.

The 24-hour fitness facility will offer a variety of workouts including hot yoga and hot Pilates.

The Y Factor, a men's urology and fertility clinic, is now open in Missouri City.