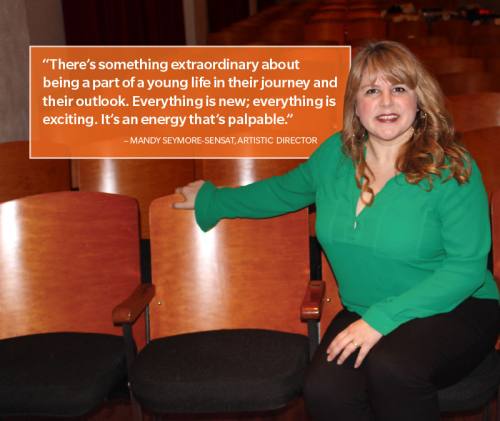 Mandy Seymore-Sensat has been running Inspiration Stage for about six years in Sugar Land.

Between overseeing theater summer camp programs and running rehearsals, Mandy Seymore-Sensat, artistic director of Inspiration Stage, can be found at the Sugar Land Auditorium at almost any time of day or night during the summer months.

Inspiration Stage is a theater program that operates year-round, offering dance and acting classes for children ages 3-18 as well as performance opportunities for youth and adult students.

Seymore-Sensat opened Inspiration Stage about six years ago in the 100-year-old Sugar Land Auditorium next to Lakeview Elementary School.

“I knew there was a space for [Inspiration Stage],” she said. “I also knew there were a lot of kids who were hungry for it.”

On the horizon for Inspiration Stage is the world premiere and pilot production of “The Big One-Oh, Jr.,” a humorous, coming-of-age musical based on Dean Pitchford’s book about Charley Maplewood’s 10th birthday party.

“Those are really great opportunities,” she said. “It’s kind of the thrill of all thrills in my profession because it’s not something that exists—it’s something I have to create.”

Seymore-Sensat grew up taking dance and acting classes and highly values teaching students the foundation of these skills in class. She transitioned to the production side of things at age 20 when an opportunity came up to run a theater company during a mentor’s leave of absence.

“I thought when I was younger I was going to move to Los Angeles or New York,” she said. “Next thing I knew I was choreographing and directing shows. That was when I realized that’s where I wanted to be. I have a knack for the big picture.”

Whether her students move to New York City for an acting career or they develop strong public speaking skills, Seymore-Sensat said she enjoys working with children.

“We learn more about ourselves in the process,” Seymore-Sensat said. “All of those things are critical now in trying to have kids understand more than their small piece of the world.”