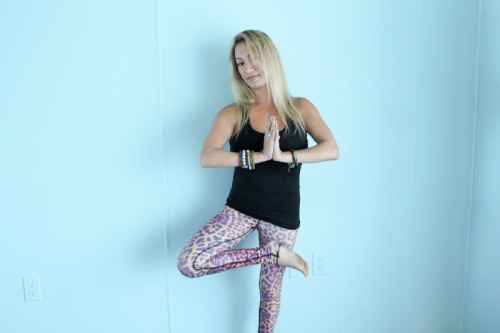 Missouri City resident Valerie Lerner has been practicing yoga for about 13 years.

Missouri City resident Valerie Lerner has visited multiple cities across the U.S. and internationally to fulfill her yoga instructor’s certification requirements. Her efforts have helped her successfully operate her own studio, Afterglow Hot Yoga, in the Sienna Plantation community.

“I travel a lot for yoga trainings and workshops,” she said. “I try to learn as much as I can from people outside of my box.”

Practicing yoga and building a business model around her passion has sparked a lot of personal growth, Lerner said.

Afterglow employs eight instructors, including Lerner, and although it is primarily a hot yoga studio, the classes vary in temperature, yoga styles and intensity. Offered classes include Vinyasa, Hatha and Bikram-inspired yoga, Lerner said. These multiple types of yoga differ in pose sequences, movement and fluidity.

Hot yoga and Bikram yoga are very similar, she said. However, the latter is a brand developed by well-known yogi Bikram Choudhury and requires a specific certification before instructors can market themselves as such.

Different classes require the room to be set at certain temperatures, depending on the intensity of the workout, Lerner said. Some classes feature fast-paced movements, which necessitates a cooler climate to prevent dehydration and other health concerns.

Certified instructors guide the attendants through the class to ensure everyone’s safety and well-being, and the studio also features an air filtration system, preventing the air from being stagnant and stifling, Lerner said. When done correctly, Hot yoga provides multiple benefits, such as improving physical and mental health.

“It helps your ability to stretch and detox,” she said. “It makes you focus on yourself and your body, and that helps you go into your moving meditation when you’re able to quiet your mind.”

Lerner said she decided to buy the studio in January from previous owner Danielle Pratt Hester—who originally opened the business in 2011—because yoga has empowered her personally. To encourage others, Lerner hosts a monthly event at Afterglow to uplift and inspire other women through movement.

“We talk about life and just motivate the women with what’s going on in life,” she said. “We choreograph yoga and dancing together. We put on fun music, and we’ll have some wine and cheese outside after.”

Being open and challenging oneself is part of the spirit of yoga, Lerner said. To welcome newcomers, she is in the midst of renovating a room at a cooler temperature for those who may be intimidated by the heat and intensity.

“A tip is to go to any class and just have fun light-heartedly and to enjoy it,” Lerner said. “Listen to your body and make the time to just be with yourself.”