When winter storms brought record-low temperatures to Texas in mid-February, millions of people lost power for extended periods of time, and tens of thousands of homes suffered damage from frozen pipes.

Among those affected by the storm was the Aerodrome Ice Skating Complex in northwest Houston, where power was lost for 38 hours and a burst pipe flooded the rink’s compressor room. Aerodrome General Manager T.C. Lewis said he borrowed a motor from a Sugar Land skating rink to get one of his compressors running.

“It literally saved us close to half a million dollars,” Lewis said.

The state’s isolated energy grid was one of several faults pointed out by critics that contributed to devastating outages and have since led to a political reckoning unlike few before it.

Across the CenterPoint Energy service area, which includes the Spring and Klein area as well as Harris County, 1.42 million customers were put in the dark by 8 p.m. Feb. 15, and it took four days before almost all were restored, according to CenterPoint Energy data.

“We ran a month’s worth of calls in about five days,” SFD Chief Scott Seifert said.

The Electric Reliability Council of Texas is the electricity coordinator for CenterPoint Energy and is one of several regulatory bodies under scrutiny. ERCOT officials said the company had to force outages for more than 70 hours statewide to avoid a wider energy shutdown.

However, this put many people in harm’s way, as Harris County Judge Lina Hidalgo said March 1 that at least 50 Harris County residents had been confirmed to have died of hypothermia or carbon monoxide poisoning.

On Feb. 14, every county in Texas was under a winter storm warning, according to the National Weather Service. The storm brought record-cold temperatures: Houston beat its record for the lowest temperature high with 35 degrees, previously set in 1895. 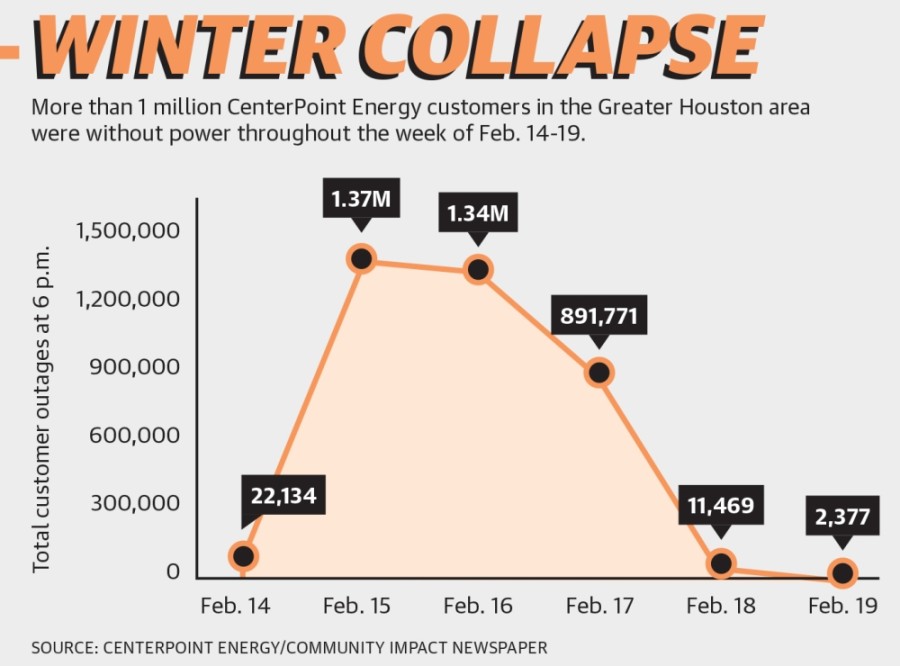 Freezing weather has only led to two other incidents in ERCOT’s history, once in December 1989 and again in February 2011. Following the 2011 incident, a federal report recommended ERCOT and other authorities make winterization efforts a top priority. Over the past decade, however, ERCOT failed to do so.

Founded in 1970, ERCOT manages the power grid that covers most of the state. While it is technically a nonprofit, it is regulated by the Public Utility Commission of Texas, a state agency. It facilitates the wholesale and retail markets, oversees grid capacity and generation, and ensures access to transmission, although the council itself does not own plants or infrastructure.

In preparation for the storm, ERCOT did alert generators and distribution partners that the storm would bring “record-breaking demand” to the system, but some lawmakers pointed out the decisions that set up the grid for failure were made years in advance.

In a Feb. 17 statement, ERCOT said around 185 generating units were removed from the grid, which it initially attributed to frozen wind turbines, limited gas supply and pressure, and frozen instrumentation. Most of the lost generation was from natural gas and coal, which dropped 20% of their output Feb. 15, per federal energy data.

Damage estimates for the February event are not yet known, but the Insurance Council of Texas has said it expects it to be the largest claims event in the state’s history.

“We are projecting into the hundreds of thousands of claims,” said Camille Garcia, the council’s director of communication. 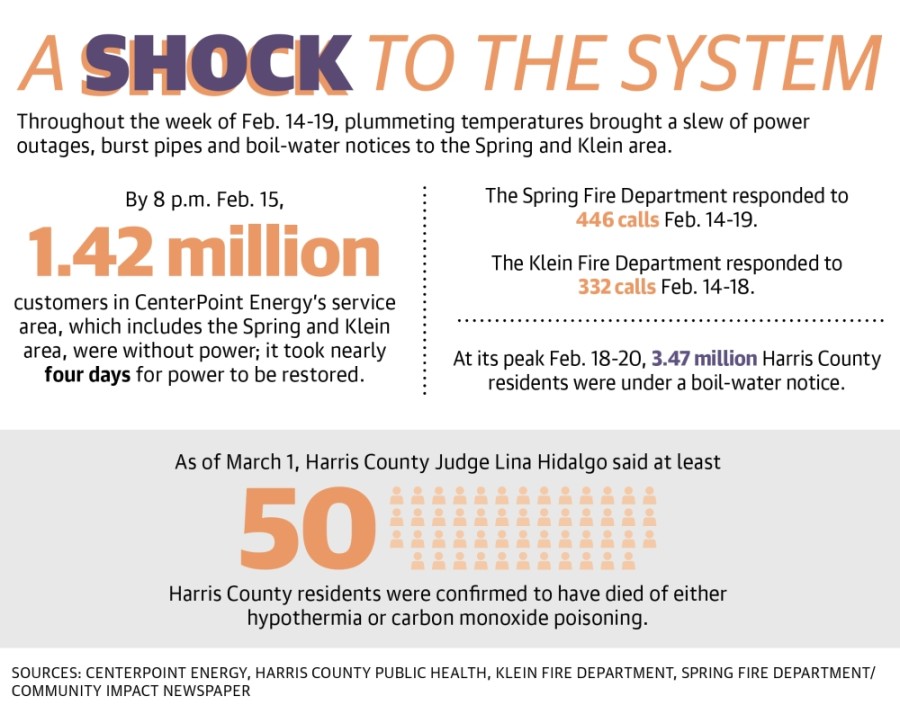 According to state officials, substantial damage occurred after the freeze as water lines broke. Due to the power outages, temperatures dropped inside homes and businesses, indirectly causing water in pipes to freeze and expand. Once electricity was restored and temperatures rose, the once-frozen pipes thawed, leading to water damage.

In the immediate aftermath of the storm, Gov. Greg Abbott made ERCOT reform an emergency item during the 2021 Texas legislative session and the Legislature began hearings Feb. 25 with ERCOT and the PUC.

Former ERCOT CEO Bill Magness—who was ousted by the board March 3—told lawmakers during the hearings that the council can make recommendations for how plants should winterize but said generators essentially follow an honor system when it comes to implementing them.

State Rep. Sam Harless, R-Spring, sent a letter to the ERCOT board of directors Feb. 17 calling out the organization for not taking the proper precautions despite being warned about the repercussions of not winterizing facilities a decade ago in the post-2011 storm report.

"My constituents demand action, and I echo their anger and frustration,” Harless said in a Feb. 17 statement. “I ... fully intend to hold leadership accountable for their failures.”

Locally, several Harris County officials floated but ultimately moved away from the possibility of the county leaving the state’s power grid. At a March 1 meeting, commissioners unanimously voted to have the county attorney represent the county in ongoing state conversations about improving ties with other power grids. Commissioners also called on the entire PUC board to resign.

Following Magness’ removal and the resignations of several ERCOT board members, the entire PUC board had also resigned by March 17.

“The lack of adequate [storm] preparation by the ERCOT CEO and the PUC chair, their failure to plan for the worst-case scenario and ... to communicate in a timely manner dictates they are not the ones to oversee the reforms,” Lt. Gov. Dan Patrick said in a statement March 1.

Hunter Marrow and Ben Thompson contributed to this report.