“I was just raised to work hard and [with the idea that] you can do anything you want to do and you can achieve whatever you want to achieve,” Sanchez said. “I’m not much different than anybody else. I feel like anybody could do it, but you definitely can’t go in expecting anything to be handed to you; you have to work just as hard as the next guy.”

Like many professional firefighters, Sanchez began as a volunteer with the KFD in 2018. After completing her State Firefighters’ & Fire Marshals’ Association of Texas classes, becoming EMT-licensed and passing the Texas Commission on Fire Protection test, Sanchez took and passed the KFD’s entrance exam and physical abilities test before becoming a paid, part-time KFD firefighter on Jan. 16.

Although the KFD is home to 15 female volunteer firefighters, Sanchez is the first to turn professional.

“I’ve got two young daughters, and we also have some young female volunteers, and they’ll see what [Sanchez] has accomplished, and perhaps she’ll be a role model for them, and they’ll see that they can do this,” KFD Chief Mike Gosselin said.
RELATED STORIES

In a historically male-dominated field, the KFD is not the only local department to make strides in gender equality. Spring Fire Department, which is home to three female volunteer firefighters, hired its first paid female firefighter, Amanda Erekson, in 2015. Erekson, began as a paid, part-time firefighter with SFD for nine months prior to submitting her application to become a paid, full-time firefighter.

“When little girls see me, they always ask, ‘Girls can be firefighters, too?’ because in books and movies, you always just see men doing the job,” Erekson said “So I feel like a lot of women and girls don’t realize it’s something they can do.”

In addition to the SFD, Erekson also works part-time at the Magnolia, Champions and North Montgomery County fire departments. Erekson was also named A Shift’s Firefighter of the Year in 2018.

In hopes of encouraging more women to pursue careers as firefighters, both Gosselin and SFD Fire Chief Scott Siefert said as new fire stations are built and old fire stations are remodeled, both departments have implemented private dorm rooms and private restrooms with showers to better accommodate firefighters of all genders.

“As I see it, fire departments have evolved for the better with more women in the fire service,” Seifert said. “As all firefighters—male and female—come with diverse backgrounds, interests and talents, fresh eyes and new perspectives add a richness we never dreamed of when I started 30 years ago. I would like to see more women apply with each new academy class.”

Though the two women hail from different departments, both Sanchez and Erekson said they are not treated any differently because of what is under their uniforms.

“Being the only [paid] woman [firefighter at SFD]... I’ve really never come across any of the terrible issues that you hear about as far as guys singling me out or anything,” Erekson said. “I just come in to work with a positive attitude and let the guys know I’m here to do my job and I’m going to do whatever it takes to do my job to the best of my abilities and that I’m always going to have their back.”
Klein Fire Department Spring Fire Department Public Safety Shari Sanchez Amanda Erekson
SHARE THIS STORY 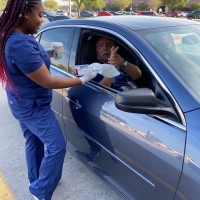 Veterinary clinics are offering curbside assistance in an effort to continue providing medical attention for pets with respect to social distancing measures.