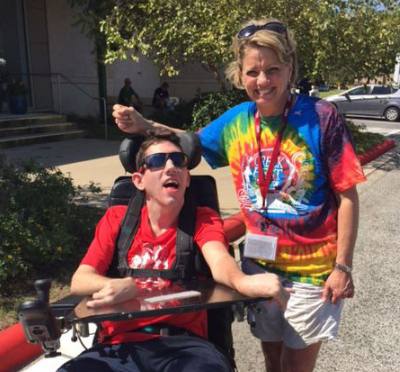 Barbara Thomason smiles with James Parker, owner of Shredding on the Go, at CreekFest Houston.

After serving as the Houston Northwest Chamber of Commerce president for 14 years, Barbara Thomason is stepping down from her role May 31.

Since 2005, Thomason has provided leadership to the chamber while working to improve the economic health of the Spring and Klein communities through a variety of chamber initiatives, including Grow Northwest, a strategic effort to improve the community and its workforce.

Thomason announced in November she is stepping down from her role to focus on her private business, LeaderShift, a training, consulting and leadership firm. The chamber named current Vice President Bobby Lieb as the new president, effective June 1.

Despite her passion for the role, Thomason said she did not immediately jump at the opportunity to become chamber president when it was presented to her in 2005.

“I got a call from one of the board members who said that this position was vacant and that I needed to apply for it,” she said. “I believe my response was, ‘Well, why would I want to do that?’”

After much deliberation, Thomason said she applied and was offered the position, which she accepted—a choice she said she rarely regretted. She said her previous roles, which included serving as a dean at Lone Star College-North Harris and a franchise owner at Gymboree, gave her the leadership skills and experience needed to be HNWCC president.

Under her leadership, the chamber achieved multiple notable projects, including strengthening its public policy positioning and beautifying the Spring and Klein area.

For example, HNWCC lobbied for bills related to flood disaster recovery and prevention at the 86th Texas Legislature, which runs Jan. 8-May 27, and has sent chamber representatives to the state Capitol to testify.

“That was unheard of 14, 15 years ago,” Thomason said. “The public policy engagement is a whole new area that I think is tremendously important to the chamber, particularly in this community that has such little governance.”

The chamber has also made aesthetic improvements to the community, such as helping construct green medians in 2010—spearheaded by interior designer Barbara Schlattman—and installing monument signs in the Cypress Creek Cultural District.

“The impact of those projects is not calculable. All we have is anecdotal evidence,” Thomason said. “For example, once the green medians were installed, you saw businesses up and down the Cypress Creek corridor [FM 1960] begin to invest in their facade and to put money in their businesses, and that is economic development at its finest.”

During her time on the chamber, Thomason developed close relationships with community members and stayed active in the community.

Lieb said many chamber projects were a result of his collaboration and teamwork with Thomason. Thomason would hand off ideas or projects to him, such as branding the bus stations along FM 1960, and Lieb would move the project ahead, he said.

When Hurricane Harvey hit in August 2017, Clara Lewis, The Pearl Fincher Museum of Fine Arts’ director of development, said Thomason helped clear debris from properties in the Cypress Creek Cultural District, including the museum and The Centrum, which sustained severe flood damage.

“She’s worked to build businesses and has been very supportive of all the nonprofits and all the community improvement projects,” Lewis said. “She’s been a strong force for good; she’s a strong leader, and she will be missed. She’s made a very profound impact for good.”
SHARE THIS STORY

The project is expected to take about eight months to complete.