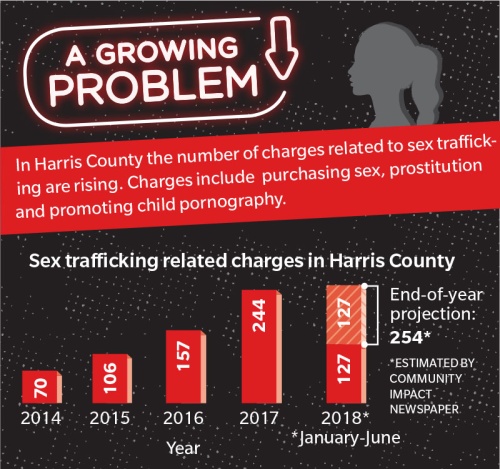 Charges relating to sex trafficking have more than tripled in the last three years in Harris County, including Spring and Klein, as the nationwide issue continues to plague the Greater Houston area.

According to the county district attorney’s office, the number of charges filed grew from 70 in 2014 to 244 in 2017 for offenses, including compelling prostitution, trafficking of persons and promoting child pornography.

Part of the issue can be attributed to Houston, which is a known hub for sex trafficking, said Dennis Mark, executive director at Redeemed Ministries, a Spring-based nonprofit for human trafficking victims. As efforts to criminalize prostitution in the city increase, the underground industry is spreading to surrounding areas, including unincorporated portions of Harris County, such as Spring and Klein, he said.

“The tighter you squeeze the tube, the more toothpaste squeezes out,” she said.

In response, local law enforcement, schools and nonprofits are working together in Spring and Klein to penalize sex trafficking and provide rehabilitative resources for victims.

Across the U.S., the number of human trafficking cases reported to the National Human Trafficking Hotline are trending upwards. From 2014 to 2017, the number of reported cases per year, which includes anonymous tips and requests for crisis assistance, rose from 5,041 to 8,542. In Texas, which has the second most of any state, it increased from 463 to 792 in that time.

Law enforcement agencies have shifted their focus to arresting traffickers and buyers, rather than prostitutes. In 2011, the Cook County Sheriff’s office in Illinois launched the National John’s Suppression Initiative to encourage law enforcement agencies to tackle sex trafficking demand. From June 28 to July 31, 2017, Harris County made the most arrests of those agencies participating, arresting 170 buyers, according to the Cook County Sheriff’s office.

Police are also cracking down on brothels disguised as businesses. In October 2012, Harris County Commissioners Court approved updates to county regulations that made it easier for law enforcement to penalize businesses conducting illicit sexual activity, such as massage parlors and hotels. Since then, the number of suspicious businesses and known locations for sex trafficking have decreased in Spring and Klein, Dennis Mark said.

Since January 2016, the Regulatory Enforcement Unit  charged individuals employed at eight businesses in Spring and Klein with sexual misconduct violations.

Recent efforts taken by federal lawmakers target another front: online solicitation. On April 11, President Donald Trump signed the FOSTA-SESTA bills, or the Fight Online Sex Trafficking Act and the Stop Enabling Sex Traffickers Act, which made it illegal for websites to knowingly assist or facilitate sex trafficking. The bills overturned Section 230 of the Communications Decency Act, which protected websites from liability from content published by third-party users.

However, efforts to curb online solicitation and suspicious businesses could just be driving the sex business further under the radar, Mark said.

“The majority of places that were operating before have gone covert and underground … but I don’t think the overall issue has reduced,” he said.

Now traffickers are using even more furtive tactics—such as renting houses rather than businesses for brothels—and it is becoming harder to assess the industry’s scope, Mark said.

“You used to be able to average out numbers based on the number of online ads and illicit strip clubs and massage parlors you had in an area, and now that all that has ... gone away, you really don’t know,” he said.

A December 2016 University of Texas study found there were 313,000 victims of human trafficking—including sex and labor—in the state. Of those, approximately 79,000 were juvenile sex trafficking victims, the study said.

Officials in local school districts said they are aware of the issue’s importance for young people and have been implementing safety measures, such as hosting staff trainings and following up with absent students.

“Right now, it does not appear to be a widely reported issue,” Klein ISD Deputy Superintendent Jenny McGown said. “The only caveat I would say about that is I do know it’s a very secretive issue among victims, so we know they tend to be very quiet about this.”

Even if victims do not voice their abuse, KISD staff are trained to be on the lookout for red flags that a student is being trafficked, such as attendance issues and untreated injuries, McGown said. The most vulnerable students are those who are homeless, in foster care or the juvenile justice system, or experiencing substance abuse, she said.

As part of its mission to ensure student safety, KISD launched the Keep Klein Safe Initiative in February 2017 to provide an online portal for anyone to submit anonymous tips and concerns on any issue, McGown said. Last year, 82 reports were submitted, she said.

The district hosts a guest speaker series this school year to inform parents and the community of various issues affecting students, such as unhealthy relationships, said Beth Gilleland, KISD executive director of college and career pathways.

School policies are also in place at Spring ISD to combat the issue.

“The district is aware that sex trafficking is a major concern in the Houston area, and we take the issue very seriously,” SISD Police Chief Victor Mitchell said. “[SISD] police have not received any reports of sex trafficking. However, state law allows employees to make anonymous reports to the Texas Department of Family and Protective Services, which the district would not be aware of due to confidentiality.”

Safety measures enforced at SISD include requiring visitors to submit photo identification, which is then scanned to alert the school if the visitor is a registered sex offender; placing surveillance cameras throughout campuses; and sending police department truancy officers to visit the homes of absent students, Mitchell said.

Local nonprofits like Arrow Ministries are providing rehabilitative treatment for sex trafficking survivors. Arrow’s Freedom Place recovery center, which opened in 2012, is dedicated to girls who have survived sex trafficking.

The program includes medical care, substance abuse treatment, psychiatric evaluation, treatment and psychological counseling. In addition, the girls are taught daily life skills, such as budgeting and housekeeping, to prepare them for living on their own, Tengler said.

In June 2017, Arrow launched its Restoration Foster Care program, which is open to boys as well as former recruiters, both of which are not admitted to Freedom Place, she said.

“There’s been a lot more awareness than when we first started working [in 2012] to find rehabilitative care or services,” she said. “More people are aware of it ... and more people are becoming engaged.”

Social media has played a significant part in helping spread awareness, she said. However, it is also used to bait young people into sex trafficking.

“We are beginning to understand that social media is a great tool, but it opens up the doors for so many other opportunities to take place–good or bad,” Tengler said. “Social media has played a powerful part in victims being groomed, lured or attracted into some of these webs of these traffickers.”

Traffickers look online for vulnerable persons who post their financial or emotional discontent on social media. After they have identified their targets, traffickers lure victims into relationships by offering them unconditional love, value and belonging, she said.

Although awareness and efforts to help survivors have increased, there are not enough resources to provide for all of their needs, Tengler said. The nonprofit’s long-term, comprehensive care facility for underage domestic sex trafficking victims is one of only a handful of such facilities in the U.S., according to Arrow Ministries.

Specifically, one area that is in need of more resources is emergency placement services, she said.

“When [these children] are rescued straight off the street, that’s not the best time for them to come into group care,” she said.

“Law enforcement, educators, school nurses, health care providers … all have to work together in collaboration to be able to make a difference,” she said.