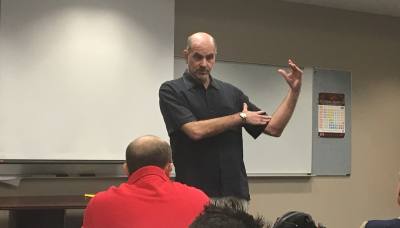 The Harris County Precinct 4 constable’s office is almost back in operation after Hurricane Harvey flooded the building at 6831 Cypresswood Drive, Spring, with several feet of water in late August, an officer said Thursday at a monthly community public safety meeting.

The dispatch and communications personnel moved back into the facility last week after several months at Klein ISD Police Department’s communication center. Patrol officers will return to the building by next week, according to the officer.

The monthly public safety meeting of the Houston Northwest Chamber in Commerce—postponed last month due to icy weather—included several other updates from local law enforcement and remarks from Andy Kahan, a victim advocate for the Houston Police Department.

Kahan discussed his work with the Mayor’s Crime Victims Office since 1992 and as a victim advocate since 2010. He said he has testified for state and federal legislation on victims’ rights issues, such as extending the statute of limitations for hit-and-run fatalities and eliminating parole eligibility for individuals convicted of first-degree murder.

He also spoke about his work fighting the sale of what he called "murderabilia"—items associated with notorious crimes or criminals and sold for profit. Kahan displayed several examples of items such as locks of hair of famous criminals, which he said could be sold on online auction sites such as eBay until it discontinued allowing the items.

In other regional police news, HPD's North Belt Division began operations Jan. 16, an HPD representative said at the meeting. The division covers an area that includes Willowbrook at Hwy. 249 and FM 1960, Greenspoint as well as property surrounding the George Bush Intercontinental Airport. The areas were previously patrolled by separate divisions.

The monthly public safety meeting features a local speaker on topics relating to law enforcement and is held at the Champions Emergency Services District building, 12730 Champion Forest Drive, Houston, at 8:15 a.m., generally on the third Thursday of each month.
SHARE THIS STORY

Harris County tenants behind on rent have some opportunity for relief after federal officials extended the U.S. eviction moratorium to Oct. 3 and local leaders opened a new direct assistance fund.

The ice cream shop's opening has been delayed to October.