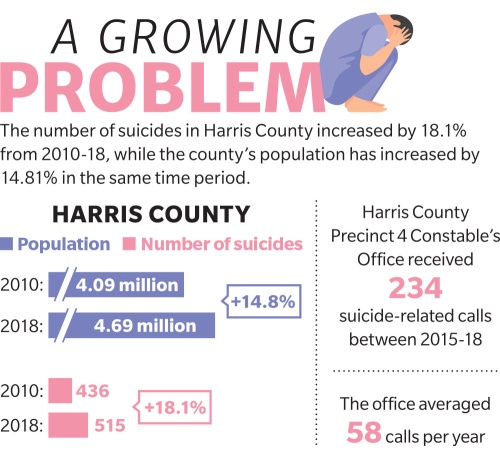 In February, a seventh grade student at Wunderlich Intermediate School in Klein ISD died by suicide. The 12-year-old’s death is just one of 142 deaths of Harris County residents by suicide thus far in 2019 as of mid-April, according to data from the Harris County Institute of Forensic Sciences.

Over a span of eight years, Harris County saw an 18.11% jump in the number of suicide-related deaths per year, from 436 in 2010 to 515 in 2018, according to data from the HCIFS and the Centers for Disease Control and Prevention. In that same time period, Harris County’s population increased by only 14.8%, according to U.S. Census Bureau data.

The trend is one local school district officials said they are experiencing across the board.

With the rate of suicides outpacing the rate of population growth in Harris County, local school districts, law enforcement agencies and mental health specialists are working to bolster the mental health system in Spring and Klein while looking to the state for additional support.

Zimmerman said one of the biggest challenges SISD faces when seeking help for young people who are at risk of suicide is a lack of local resources that will accept young patients.

“Our cases are getting younger and younger, and it’s very hard to find agencies or therapists who will take someone in second grade,” she said.

One of the few local resources for all ages is Cypress Creek Hospital, which features a 128-bed psychiatric facility and offers inpatient and outpatient care for behavioral, mental and substance abuse issues.

To keep up with a growing demand for adolescent mental health services, the hospital added a second adolescent inpatient unit in January 2018, doubling its number of adolescent beds from 16 to 32.

Dhatt added that suicide is typically caused by a variety of factors among which include bullying and cyberbullying for children and adolescents—a trend social media has only exacerbated.

However, officials agree the efforts of one hospital are not enough to support an entire community. To fill this void, Spring, Klein and Cy-Fair ISDs are adding new programs to increase mental health support for students.

In December, KISD held its first student-led Mental Health Fair, which allowed students to attend seminars related to mental health issues, such as dealing with anxiety and depression.

In addition to creating Zimmerman’s position, SISD began offering Youth Mental Health First Aid training during the 2017-18 school year, which helps community members learn how to evaluate and assist when a young person is in mental health crisis.

“You have a lot of places that don’t want to talk about [suicide] because if we don’t talk about it, it doesn’t exist,” Zimmerman said. “SISD very much takes the position of, ‘Let’s talk about it so we can get you the help you need and figure it out together.’”

SISD also recently developed a quick reference guide for staff on nonsuicidal self-injury and suicide, which contains several resources, including an assessment form and corresponding step-by-step response chart, in the event of a student crisis.

While officials agree local school districts have made strides in providing mental health support for students, statistics indicate suicide also affects those who are beyond school-age.

While there are several resources in the Spring and Klein community where adults can seek mental and behavioral health support, such as IntraCare Behavioral Health North and Cypress Creek Hospital, law enforcement officials said they also play an integral part in bridging the gap between those who are suicidal and the help they need.

“There’s a lot more awareness now,” he said. “We need to recognize the symptoms of depression and people that are at risk of taking their lives. If you see something, say something—and report it. Because there is help.”

On a county level, Frank Webb, the project manager of Harris County’s Bureau of Mental Health and Jail Diversion, said the Crisis Intervention Response Team, the Homeless Outreach Team and its new telepsychiatry program are all tools used to connect suicidal individuals with assistance.

“We need more mental health resources,” Webb said. “Unfortunately, every law enforcement agency that I’m aware of—their numbers of responses to people with mental health issues and in crisis are going up … and the resources have gone down.”

Webb said the sheriff’s office recently implemented a new recording system, which includes a form law enforcement officers have to fill out if they respond to a call that involves someone with mental health issues. Webb said he anticipates the enhanced reporting will lead to better data to work with in the future.

Also bolstering its support for adult patients, Cypress Creek Hospital opened the Honor Strong Program for first responders in November, which offers trauma-informed care to help first responders get back to their line of duty.

As of May 3, SB 10 was approved by the Senate but awaits assignment to a House committee.