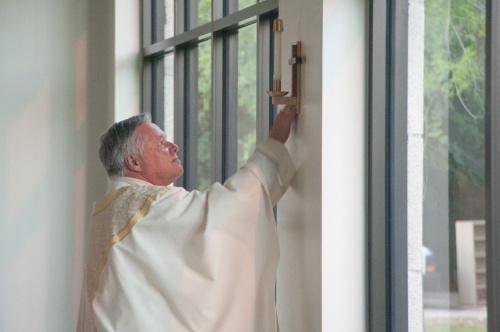 Father Norbert Maduzia of St. Ignatius of Loyola Catholic Church prepared the church for its rededication in May after renovating in the wake of property damage caused by Hurricane Harvey.

Father Norbert Maduzia waded into his church through hip-deep water on Aug. 28, 2017, surveying the damage from Cypress Creek floodwaters that had flowed into the building for three days.

"Everything is lost," he said in a Facebook Live video that went viral after the flood. "I can't describe it."

Now, almost one year after the event that flooded neighborhoods along Cypress Creek and in other areas of Spring and Klein, St. Ignatius of Loyola Catholic Church is again holding services in the church, and the activities of the church are getting back to some semblance of a normal routine, he said. However, the memories of the storm, which caused $4.2 million in damage to church property, will linger.

"It wasn’t the hurricane, it was the constant rain—54 inches of rain," Maduzia said. "Don’t let anyone try to convince you Noah's Ark wasn’t real."

The cost of damage has been covered through insurance, the Archdiocese of Houston-Galveston and donations, he said. The church received an unexpected $1.1 million in donations after his video went viral, he said.

“They identified with us—little schoolchildren wrote us notes and letters, they were praying for us … it was wonderful that people all over the world were thinking of us, it really gave us a boost and kept our spirits high,” Glueck said.

The church held a rededication in May, and attendance has been recovering gradually, Maduzia said. However, last year’s rain has left him a little nervous about upcoming hurricane seasons.

"I’m a native Houstonian and hurricanes have never bothered me," he said. "[But] you can feel tension when you see several days of heavy rains. It’s part of our PTSD."

The church held an open house July 28 to share its progress with the community and welcome parishioners both old and new. Services had been held in a large air-conditioned tent outdoors since December.

Because so many church members were affected by the flood, church and program attendance has declined, but attendance at 7:30 a.m. Mass on Sundays is back to normal, Maduzia said. The later services are still sparsely attended.

Editor's note: Community Impact Newspaper's Spring/Klein edition will look at community recovery one year after Hurricane Harvey in our August issue, which will reach mailboxes the week of Aug. 13.