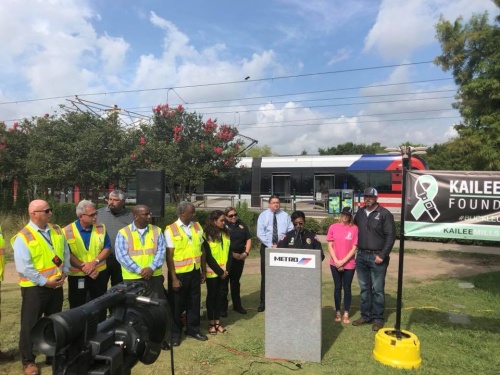 To kick off their safe-driving partnership, Kailee Mills Foundation volunteers and METRO Police participated in a three-day event from June 11-14 at METRO Park & Ride locations. They distributed information at each location on safe driving practices and seat belt usage.

The Metropolitan Transit Authority of Harris County has launched a safety initiative with the Kailee Mills Foundation, a Spring-based nonprofit organization, to raise awareness about the importance of safe driving and seat belt usage. The ongoing partnership, which kicked off on Monday, June 11 at the METRO Cypress Park and Ride at Hwy. 290 and Skinner Road, aims to encourage people to buckle up by posting the foundation’s decals on METRO vehicles and hosting events at METRO Park and Ride locations, officials said.

“We’ve placed decals on our police and safety vehicles, and we helped organize a press conference as well to get more information out about their organization and their mission,” said METRO spokesperson Monica Russo.

The decals, which range from 2 to 6 inches in size, display a ribbon with a seat belt as well as a QR code that links back to the foundation’s website.

“We are considering putting decals on METRO STAR vans, [which are used for carpooling],” said David Mills, president of the Kailee Mills Foundation. Additional potential efforts include erecting signs encouraging seat belt usage and distributing brochures and decals at other METRO Park and Ride locations, he said.

The Kailee Mills Foundation was formed in 2017 following the death of Klein ISD student Kailee Mills on Oct. 28. Mills, who was not wearing a seat belt, was ejected from the vehicle in a fatal one-car rollover accident, according to information on the foundation website.

The foundation is hosting an upcoming fundraiser, the #BuckleUp4Kailee 5K, on June 23 at Klein Oak High School. The run includes powder and liquid glow paint, and concludes with an after-party under a blacklight setting. To register for the event, click here.
SHARE THIS STORY