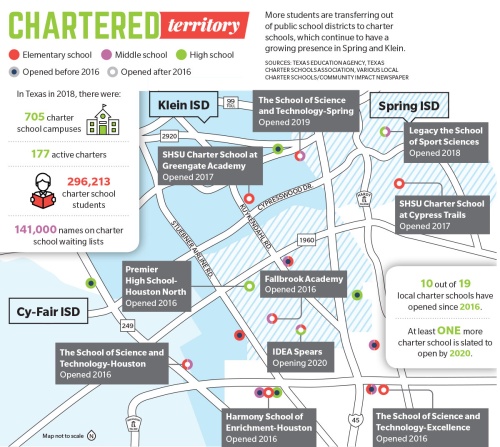 More parents are transferring their students from public school districts to local charter schools as the alternative public schools continue to open in suburban areas, such as northwest Harris County.

Within Spring and Klein’s nine ZIP code area, there are 19 charter schools with at least one more planning to open next year. In the 2018-19 school year, 1,036 students within Klein ISD’s boundaries transferred out to charter schools, while 2,207 Spring ISD students and 3,477 Cy-Fair ISD students opted to attend charter schools, according to the Texas Education Agency’s student transfer report.

Across the state, the number of charter schools has likewise increased since the Texas Legislature first authorized public charter schools in 1995. In 2018, there were 705 charter schools and 177 active charters serving 296,213 students in Texas, while 141,000 students remained on waiting lists, according to the Texas Charter Schools Association­—a charter school advocacy group.

“People are accustomed to having choices in all facets of their life and for a long time, we didn’t have a broad range of options for schooling—particularly if you were poor,” said Todd Ziebarth, senior vice president of state advocacy and support for the National Alliance for Public Charter Schools. “If you had money, you could send your child to a private school or you [could] move to a wealthy community where you [could] afford the property taxes. But if you [couldn’t] follow those paths, your choices were limited.”

While demographers with Population and Survey Analysts project KISD’s and CFISD’s enrollments to increase over the next decade by 7.21% and 5.32%, respectively, SISD’s enrollment is slated to drop by 4.74% between 2018-19 and 2028-29, according to Templeton Demographics.

District officials said they attribute the decrease in part to charter schools.

“Like other school districts on the outer edge of Harris County, we have seen charter growth over the last several years as charters have pushed out from Houston’s Inner Loop,” SISD Chief Communications Officer Tiffany Dunne-Oldfield said.

While proponents of charter schools tout small class sizes and flexible schedules, those in opposition counter that charter schools take funding away from traditional independent school districts and are not held to the same standards.

Open-enrollment charter schools are privately operated and tuition free. Although they do not receive local property tax revenue like ISDs do, charter schools receive state funding based on the average daily attendance of students.

Following the passage of House Bill 3 by the Texas Legislature in May—which allocated $11.5 billion toward public education reform—charter schools will receive about $767 more per student in 2020-21 than they did in the previous biennium, according to TCSA. However, TCSA CEO Starlee Coleman said charter schools are still at a funding disadvantage.

“We came into the legislative session with about a $1,700 funding gap for charters overall [per student], and HB 3 is going to make that funding gap a little worse for us,” she said.

Despite these funding challenges, new charter schools are continuing to open in Spring and Klein each year.

While SHSU originally planned to open eight Houston area charter schools, Program Superintendent Ronny Knox said the university decided to start small with plans for future growth. He said one of the key tenants of the program is cultivating good relationships with neighboring ISDs.

“We’re very adamant about not putting a new charter school into a district that does not give us permission to put one there because we don’t want any animosity between the university and their local ISD partners,” Knox said.

Allison Serafin, the executive director of IDEA Public Schools’ Greater Houston region, said she believes charter schools such as IDEA offer a rigorous curriculum that prepares students for college—especially those who are economically disadvantaged.

In addition to charter schools geared toward college preparation, some, such as Evolution Academy Charter School located in Spring, are focused on  dropout recovery.

“I don’t see us as hurting district schools—I see us as helping those big schools that miss that person who falls through the cracks,” Principal Julia Askew said. “There was very much a need here because before … there was nothing else for [failing students] to do but drop out.”

As the number of student transfers to charter schools has increased since 2014-15  by 47.9%, 28.5% and 57.6% in SISD, KISD and CFISD, respectively, the districts are striving to stay competitive.

“We recognize that the smaller, sometimes more personalized charter school environments are attracting families away from their neighborhood schools,” Dunne-Oldfield said. “That’s precisely why over the last 10 years, SISD has established several smaller, specialized schools.”

Students at KISD can also participate in Vistas, which district officials said allow students to work through curriculum at their own pace, and pathways in advanced nursing, geospatial engineering and land surveying, which give students the opportunity to earn associate degrees.

While open-enrollment charter schools can cap enrollment and hold lotteries when there are more applicants than available seats, Henry said public schools must accept and make room for all students.

“They take who they want; we take all students,” he said.

While traditional ISDs and charter schools may have differences, public education officials agree they both aim to cultivate successful students.

Irma Sanchez, a mother of three whose home is zoned to Hancock Elementary in CFISD, said her first two children attended private schools. However, when it came to her third child, Sanchez said private school tuition was no longer feasible so she considered charter schools.

“We endured one semester of chaos, poor management, [a] rundown building and subpar staff,” Sanchez said.

After one semester, Sanchez said she withdrew her daughter from the charter school and enrolled her at Hancock Elementary.

“Luckily, our experience was very good,” she said. “It quickly became obvious that when compared to the charter school, … the issues were due [to] a lack of funds.”

However, as her community is not home to any charter schools, Coleman said she does not know what other choice she has.

“I deserve some options within the public school setting, and there are not currently any in our little pocket of Austin. So I don’t know what we’re going to do,” she said.

Danica Smithwick contributed to this report.
SHARE THIS STORY