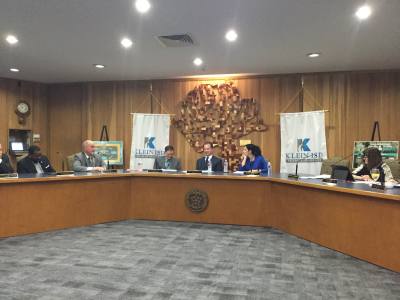 Klein ISD Vice President Rick Mann (third from left) has served on the board for 28 years.

Following 28 years of service in Klein ISD, the longest-tenured trustee in the district’s history will retire this November.

Vice President Rick Mann announced he will not run for reelection in the November election, during the May 13 board of trustees meeting.

At the meeting, Mann reflected on his time spent serving on the school board.

“I’ve had the privilege of working with four superintendents, over 20 board members, each one having their own ideas and their own thoughts,” he said. “I believe it is time in my life to start a new direction and watch this district continue to grow and prosper.”

Mann was elected to his ninth term on the KISD school board in 2016.

He served in the U.S. Air Force during the Vietnam War before graduating from the University of Texas with a bachelor’s degree in management. Mann also serves as general manager of the Harris County Water Control and Improvement District No. 133 and will continue to serve as KISD’s vice president until November.

“My hope is that this will clarify the question: Will Rick Mann run again?” he said. “The answer is thank you, but no.”
SHARE THIS STORY

The recommended basin would hold about 300 million gallons of stormwater.

Many school districts throughout the state have had to alter or cancel their plans to provide distance learning in the coming school year after House Bill 1468, which would have ensured funding for districts for each student enrolled in online-only classes, failed to pass in the 2021 legislative session.