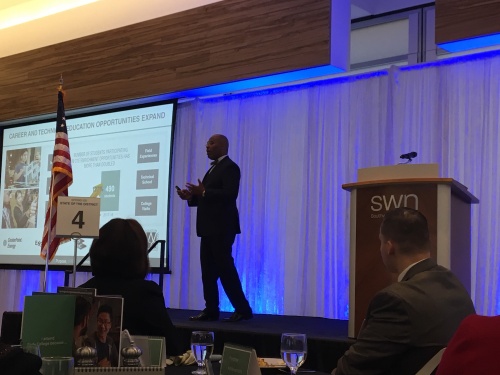 Superintendent Rodney Watson discusses the districtu2019s progress since its five-year strategic plan launched in 2015 at the Spring ISD State of the District on Jan. 30.

During the second annual Spring ISD State of the District on Jan. 30, Superintendent Rodney Watson discussed the district’s progress since its five-year strategic plan launched in 2015 as well as some of the challenges the district is facing and how it plans to address those.

One of the most notable challenges Watson said SISD is dealing with is declining student enrollment. In the 2015-16 school year, SISD had a total student enrollment of 37,022; by the 2017-18 school year, that enrollment had dropped to 35,959 students. Watson said this trend is due largely in part to a slowing population growth across the entire Greater Houston area, as well as a growing presence of charter schools locally.

“Out of the new students in the Houston metropolitan area, there’s a greater influx of students who are going to charter schools,” Watson said. “We’ve seen an uptick in charter schools moving into the Spring area, so we’re going to continue to monitor that as well as we’re forecasting for the future.”

Also contributing to this decline, Watson said SISD data indicates roughly 5 percent of fifth-grade students opt out of the district upon entering sixth grade—a trend the district hopes to change with the opening two specialty middle schools in the 2019-20 school year.

To view the entire 2019 Spring ISD State of the District presentation, click here.

Accomplishments
Now in Year 4 of the five-year strategic plan, Watson said SISD has made great strides in meeting academic goals after implementing new curriculum and investing in special education.

Since the launch of SISD’s five-year strategic plan in 2015:
• The percent of SISD students who reached “meets grade level” increased on 16 of the 22 STAAR tests in 2017-18, and the percent of students who reached "masters grade level” increased on 12 of the 22 tests that same year.
• Nearly 70 percent of SISD elementary campuses made solid year-over-year gains in third-grade reading, according to the 2017-18 STAAR test results.
• From 2016-17 to 2017-18, STAAR passing rates for SISD students in grades three to eight who receive special education services increased by 11 percent in math and 6 percent in reading.
• SISD’s end-of-course exam scores increased on four out of five of the subjects, according to the 2017-18 EOC exam results. The only subject without growth was U.S. History.
• SISD campuses received 28 percent more Texas Education Agency distinctions in 2017-18 than they received in 2015-16.

“We know that literacy is the primary focus,” Watson said. “ We’re seeing that there are more students that are on level in kindergarten as a result [of our preschool and pre-K programs]. If our students are not reading on grade level by third grade, there’s a very good likelihood that they will not be successful.”

SISD has also experienced a 127 percent increase in the number of students participating in career and technical education enrichment opportunities.

“We’re looking for individuals that can provide internships, job shadowing, career exploration, field experiences, technical support or even college visits,” Watson said. “With the 127 percent increase in students who are enrolled in our CTE program, we need more partnerships to provide [students] with those externships that we’re looking for.”

From an employment standpoint, since 2015, teacher turnover in SISD has decreased from 27 to 23 percent, first-year teachers only make up 2 percent of SISD’s teacher population instead of 13 percent, and the percentage of teachers with master’s degrees has increased from 24 to 28 percent.

“We know that our employees could go anywhere," Watson said. "We know that there’s a shortage of teachers and educators throughout the state and the country. But once again, when we think about the individuals who are employed in Spring ISD, it is about a higher calling; it is about a higher purpose, because we have one goal. And that one goal is greater achievement for every student in our district."

SISD will also relocate its Spring Early College Academy to the campus of Lone Star College-North Harris this fall and will continue to focus on its arts integration initiative.

On top of these additions, Watson said SISD will launch a new learning management system, Schoology, in 2019 to help consolidate curriculum, assignments and grades for teachers, students and parents.