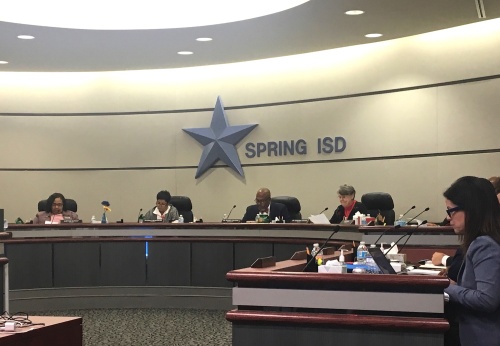 Spring ISD board of trustees named two new buildings at its Dec. 11 meeting.

Middle school No. 8, which will be located in the northern portion of the district near Northgate Crossing and Springwoods Village, will be named Springwoods Village Middle School. The school is one of the projects included in the $300 million bond referendum approved by voters in 2016.

Middle school No. 9 will focus on leadership development and will be located in the building on TC Jester Boulevard currently occupied by the Spring Early College Academy when that school relocates to Lone Star College's North Harris campus in the 2019-20 academic year.

Board members suggested several names, including Spring Middle School Leadership Academy and the names of various individuals who have served in the district for many years, including two current board members.

The name Spring Leadership Academy was chosen by a vote of 5-1. Board member Winford Adams opposed the name and Chris Bell abstained. Adams and Bell had said during discussion they would prefer the building be named after an individual.

The board also recognized the newly chosen principal of the ninth middle school, Kevin Banks, who is currently associate principal at Roberson Middle School.

Specifics of the school's programs and offerings are still being developed, but it could include community service and technology components, SISD Superintendent Rodney Watson said.

"It will be focused on leadership in a blended learning environment ... [and] technology will be one of the components infused in that," Watson said.

The board also authorized the issuance of the final $105 million in bonds from the 2016 bond referendum to complete projects, such as construction of three ninth-grade centers and a stadium.

In other business, the board swore in trustees Don Davis, Position 6, and Jana Gonzales, Position 7, who ran unopposed for office this year.

The board also chose its officers for 2019.