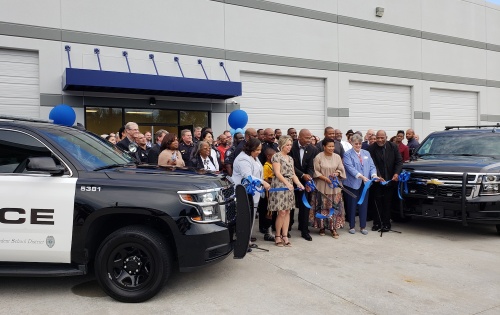 Two hours before the regular Spring ISD board of trustees meeting Oct. 9, the SISD community gathered at 420 Lockhaven Drive for the ribbon cutting of the new Police Command and Tax Office, the first completed building project of the 2016 bond referendum.

Voters in 2016 approved a $330 million bond referendum, including funds for three ninth-grade centers, two middle schools, a stadium and a renovated police command center, among other projects.

The 42,000-square-foot building was renovated to replace the police department’s previous facility on North Forest Boulevard. The district’s tax office is located on the second floor.

The building cost $2.9 million, and total facility cost including renovation was expected to be around $5 million, SISD Chief Operations Officer Mark Miranda has said.

The SISD board of trustees meeting held after the ceremony included unanimous approval of the 2018-19 tax rate, which is unchanged at $1.51 per $100 assessment. The tax rate includes $1.06 per $100 valuation for the maintenance and operations portion of the rate, and $0.45 per $100 valuation for the interest and sinking, or debt service, portion of the rate.

The board also discussed its 2019 legislative priorities, considering such issues as school finance, the Texas Education Agency accountability rating system and school safety. Board members agreed to finalize the priorities at a future date.