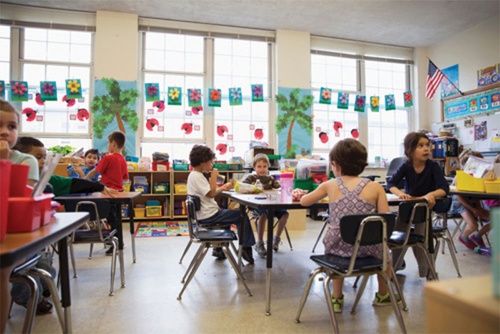 Texas school districts received A-F letter ratings from Texas Education Agency for the first time this fall, and Spring and Klein ISDs follow the statewide trends in which more affluent districts and campuses generally fare better than those with high levels of economic disadvantage.

According to TEA, three of SISD’s economically disadvantaged campuses would have received an Improvement Required rating if the district had not received an exemption due to Hurricane Harvey, and all but three SISD campuses are more economically disadvantaged than the state average, 58.7 percent. Although it was not rated in 2017-18 due to Harvey, SISD would have received a C rating overall.

KISD, where 39.9 percent of the student body is economically disadvantaged, received an overall B rating. Only three KISD campuses have more economic disadvantage than the state average, and none of its schools received an Improvement Required rating in 2017-18, according to TEA.

“When you control for economic status as well as mobility, you can really see that districts and campuses that have less economic disadvantage frankly fare better in this accountability system,” KISD Deputy Superintendent Jenny McGown said in a phone interview. “We don’t think it’s fair.”

Poor campus performance can also trigger TEA monitoring and intervention programs, said Lauren Callahan, TEA media relations and social media manager. Five consecutive years of F or Improvement Required ratings can result in closure of the campus or installation of a board of managers to replace the elected school board, Callahan said.

McGown said she believes the letter grades can give an incorrect picture of a district’s performance, even if it is not in danger of closure.

“It’s dangerous; it can create perception that a campus is not doing an excellent job,” she said. “A parent can look at that and think it must not be a very good school.”

McGown said she believes the system oversimplifies year-to-year performance as well as accomplishments that cannot be scored on the State of Texas Assessments of Academic Readiness, or STAAR, tests.

“I think that there are other ways of measuring student success, and what the public is going to see is one letter grade that is heavily determined by the way that our students perform on a very few days,” McGown said.

Lupita Hinojosa, SISD chief of school leadership and student support services, said the TEA system lacks depth and detail, and it shows a series of wide ranges that can vary at each step along the scale.

“It’s very simple, but you’re not able to move that needle because a letter grade doesn’t allow you to show the growth,” Hinojosa said.

Individual campuses were rated based on the old system in 2017-18, receiving a Met Standard or Improvement Required rating based on a numeric score. They will receive a letter rating in 2018-19, according to TEA.

The three SISD schools that would have received Improvement Required ratings in 2017-18—Bammel and Claughton middle schools as well as Dekaney High School—each received accountability ratings lower than 60, the cutoff for a Met Standard score. All three campuses also have more economically disadvantaged and mobile students than the state average, according to TEA data.

Economic disadvantage measures the number of students who qualify for a free or reduced-price lunch, and the mobility rating measures how many students move in and out of a district in an academic year, according to TEA.

Hinojosa said mobility, which is high on many SISD campuses, has never been fully reflected in a TEA system.

Despite the trend for economically disadvantaged schools to receive lower ratings, there are exceptions. Ponderosa Elementary School Principal Shanna Swearingen said her campus received an Improvement Required rating in 2012-13 before she joined the campus in 2014. However, in
2017-18 it received an overall score of 82 despite 79.5 percent of its students being economically disadvantaged.

The school focused on improvements in transparency, culture, systems, data and instruction to improve its ratings, she said. The school also scheduled intervention times with each student to evaluate his or her needs, she said.

“Our focus is preparing them with what they need to know, and they’re going to be prepared for any assessment,” Swearingen said.

Other SISD campuses with high scores despite a higher than average  percentage of economically disadvantaged students include the district’s school of choice Spring Early College Academy, which received a score of 98 in 2017-18, and Cooper Elementary School, which received an 88.

TEA officials have defended the system, which was mandated by House Bill 22 in the 85th Texas Legislature in 2017. The system is designed to communicate a district’s overall annual progress in straightforward language more easily understood than the previous ratings, Callahan said.

Callahan said the scoring system takes economic disadvantage into account in the scaling system it uses, and it omits the lower of two domains when calculating the final score.

Six of the nine traditional districts statewide that received an F rating in 2017-18 had a higher rate of economic disadvantage than the state average, according to TEA data.

Despite this, Callahan said the TEA denies a strong relationship between economic disadvantage and ratings.

“We know that while there may be a moderate factor between a child’s economically disadvantaged status and results, we here at the agency know there is not a strong relationship between the two,” Callahan said.

“There is some evidence that disadvantaged students make greater gains than their peers,” Potter said.

However, HERC has not made any final determinations about the fairness of the TEA rating system based on existing data, Potter said.

Children at Risk, a Houston-based research organization focused on children’s issues in Texas, has found a relationship between raw achievement scores and poverty but has not determined whether the TEA rating system is unfair, said David McClendon, co-director of the organization’s Research Center for Social Measurement and Evaluation.

McClendon said about half of districts with an economically disadvantaged population of 75 percent or more scored A or B in their overall ratings. Common factors among high-performing, high-poverty districts include good attendance and nutrition, he said.

“Some of our legislative priorities will relate to assessment and accountability system,” she said.