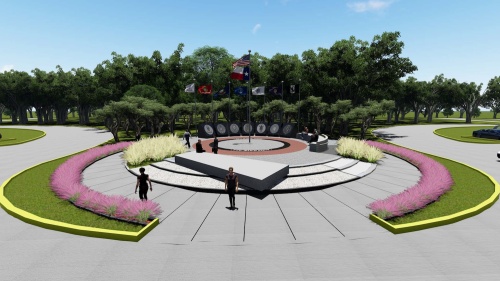 A veterans memorial site will be part of the grounds at the new Spring ISD stadium off Cypresswood Drive.

Spring ISD board of trustees Tuesday night approved a November election and discussed plans for a veterans memorial at the site of a stadium that will break ground in September.

The board approved calling a trustee election Nov. 6 to fill three-year board seats for Position 6 and Position 7. The positions are currently filled by Don Davis and Jana Gonzales, respectively. The deadline for candidates to file is Aug. 20.

The board also discussed the upcoming groundbreaking for a districtwide stadium off Cypresswood Drive. The $38 million stadium is part of the $330 million bond package approved by voters in 2016.

When completed, it will include seating for 8,000 guests as well as areas for concessions, locker rooms, press box and community room. The site will also include a memorial site honoring veterans in all branches of the armed services, board member Chris Bell said.

Bell said he and other board members felt the Spring area, which is unincorporated, needed a site honoring veterans in the heart of the community.

“We don’t have a VFW [Veterans of Foreign Wars] … nothing like that for our veterans and those who have paid the ultimate sacrifice, including our students,” he said.

Board members Bell and Davis began discussing the need for a memorial to veterans in the district several years ago, before plans for the bond materialized, Bell said.

The memorial will be located on the east side of the stadium and feature a circular monolith design along with bench seating, according to an SISD press release. The site will include flags representing all of the armed services as well as prisoners of war and those missing in action. It will be completed at the same time as the stadium, officials said.