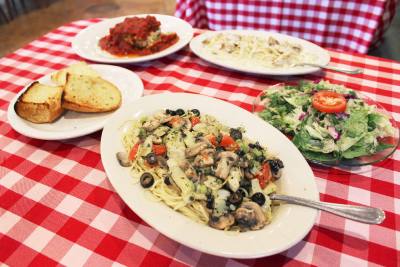 Having opened more than 75 years ago, Lasagna House has withstood the test of time, owner Matt Vernon said.

While Lasagna House was first opened in Chicago in 1942 by Pete Pizzo, an 18-year-old Sicilian immigrant, Vernon said the restaurant relocated three times since then to its present location at Westheimer Road and Eldridge Parkway in Houston. Shortly after, Pizzo opened a second location at FM 1960 and I-45 in Spring.

“My grandmother’s Sicilian, so I really like Italian food and was having a hard time finding it,” Vernon said. “So I came here and tried the food and loved it. I found out employees got discounts so I asked for a job.”

Vernon was hired as a waiter and moved up the ranks to become the general manager. In 2013, the Smiths asked Vernon if he and his wife, Mary, wanted to buy the FM 1960 location.

“I said ‘You know I started here as a customer, right?’ And that’s how my wife and I ended up buying my favorite restaurant,” he said.

“We make all of our own salad dressings, sauces, fillings, pizza dough and desserts,” Vernon said.

The restaurant has an on-site garden where Vernon grows the produce used in the eatery’s dishes.

“I believe God makes better food than the supermarket, and we treat our garden like we do our kitchen—there are no chemicals,” he said.

Two years into Vernon’s newfound venture, a fire at a neighboring business caused serious damage to Lasagna House, forcing the restaurant to close for 26 months for renovations.

A month after reopening, Hurricane Harvey caused water damage to the eatery’s new roof. Vernon said he left some of the water-stained tiles in the ceiling as a reminder to be thankful.

“That’s the thing about being in this community for so long—everyone jumps in when somebody’s in need,” he said.  “I’m humbled to be in a community like that, and every chance we get, we give back, too.”

The recommended basin would hold about 300 million gallons of stormwater.

Many school districts throughout the state have had to alter or cancel their plans to provide distance learning in the coming school year after House Bill 1468, which would have ensured funding for districts for each student enrolled in online-only classes, failed to pass in the 2021 legislative session.

Following the 87th Texas Legislature's failure to pass House Bill 1468, Klein ISD will not be able to launch the Klein Virtual Academy in the 2021-22 school year, district officials announced June 15.