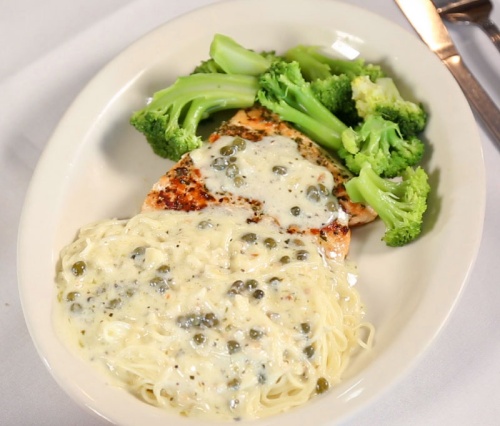 Salmon Bianco ($18.95) A 6-ounce fillet of pan-seared salmon is served with broccoli florets and angel hair pasta and topped with lemon and caper cream sauce.

When Charlie Salvaggio bought Giuseppe’s Restaurant in 1993, there were only a handful of restaurants on Louetta Road in Spring.

There is also no shortage of Italian food in the area, with restaurants serving up traditional and modern cuisine at locally owned and chain restaurants throughout Spring. Salvaggio said it is a challenge for a mom and pop restaurant to make a mark.

“What’s kept this restaurant going is the customer loyalty,” Salvaggio said. “I have people that have been coming in two or three times a week for 25 years.”

Established in 1983, Giuseppe’s is a family-owned restaurant that specializes in traditional Italian dishes and comfort food, such as lasagna, spaghetti and meatballs, and chicken piccata, as well as carryout pizza. All of the food is made from scratch, and most of it is cooked by Salvaggio, who has been in the food industry in Texas since a young age when he worked at his father’s cafe in a bowling alley.

“I don’t have the fancy dishes. … I’m more like a neighborhood restaurant,” he said. “Most of the people that come in here know what they’re going to eat. About half of them that come here, I already start fixing what they want [before they order] because they always get the same thing.”

Because of the tight-knit relationship he has with his customers, Salvaggio said he has been adding new foods to the menu throughout the years based on diners’ requests. For instance, the Shrimp Sandini was named after a customer named Sandy, who asked for the dish. The Pasta a la Charlie, which is served with chopped sausage and mushrooms, became a staple after Salvaggio cooked it on whim for a customer.

“I have actually made up dishes, and on a slow night, I’ll play with it, try to fix it,” he said.

When it comes to developing the right dishes, Salvaggio’s philosophy is simple: Food should bring happiness.

“When people come in here, they’re going to eat, so they’re happy,” he said. “I’m always working with happy people.”