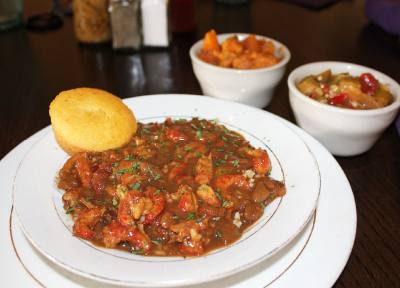 Crawfish etouffee ($13.75) This spicy sauced dish consists of crawfish and is served over rice.

Pamela Graham might not have opened her restaurant, Le’ Pam’s House of Creole, if it was not for some advice she received from a customer at the beauty salon Graham worked at in New Orleans in the
early 2000s.

“I’ve always loved cooking. I would make different things and bring them into the salon just for the fun of it,” Graham said. “I had a lady who would always come in and say, ‘You’re gifted, but you’re not using your gift wisely—you can cook.’”

Graham took the advice to heart and decided to attend culinary school. She graduated in 2005 and pursued a career in cooking, which took her from New Orleans to California, and then to Houston where she opened Le’ Pam’s House of Creole on FM 1960 in 2013.

Although she no longer lives in New Orleans, the city’s culture and flavors inspired the items on Graham’s menu and the decorations adorning the walls.

Graham said she wants her customers to feel like they are on Bourbon Street while dining at her restaurant.

Graham said she comes from a line of cooks and inherited her cooking talent from her grandmothers, who each taught in a unique manner.

“My grandmother in Louisiana would do all the cooking and just have us in the kitchen testing stuff,” Graham said. “The grandmother in Mississippi—she was a whole different ballpark. We had to go pick our own eggs, milk our own cows. They had 40 acres, so whatever vegetables you wanted you had to pick for yourself.”

She passed her love of cooking on to her children as well, she said.

“I have a son and daughter in the Marines, and they are both chefs for the Marines,” Graham said. “So, they both can cook too—it’s just in the bloodline.”