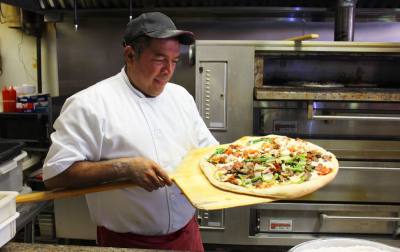 Owner Antonio Portillo opened the Louetta Road location for his pizza restaurant in 2009.

While in New York, Portillo said he spent some time working at a Greek restaurant before leaving to open his own pizza shop. He said he prefers the environment at a pizza shop because it allows him the opportunity to interact with his customers and get to know the community.

Portillo pays homage to the restaurant’s New York roots through the decorations adorning the walls—including sports memorabilia and photos of the New York City skyline—and with some of the specials the restaurant runs.

“On Thursday, we do 99-cent cheese slices, or you can get a whole pizza for $8,” Portillo said. “In New York, we did similar specials. We try to keep it traditional.”

The items on the menu are also inspired by Portillo’s New York restaurant. While not traditionally sold at pizza shops, Portillo said he sold a lot of Jamaican meat pies in New York, and because of that, he decided to offer the dish in the Greater Houston area as well.

Another unique offering on the menu is rice balls, which are filled with rice, ground beef and cheese. The restaurant also serves pizza, wings, pasta, salad, calzones and desserts such as cannoli and chocolate chip cookies.

Portillo said customers can order whole pizzas as well as individual slices. The restaurant also offers delivery within 3 miles of the restaurant.

When it comes to pizza toppings—including meats and vegetables—Portillo said he enjoys experimenting with different combinations.

“Every day I create different slices,” Portillo said. “When we get our customers, they want to see something different, and I’ll say, ‘Let me try that.’”