Development in The Vintage draws concern over flooding 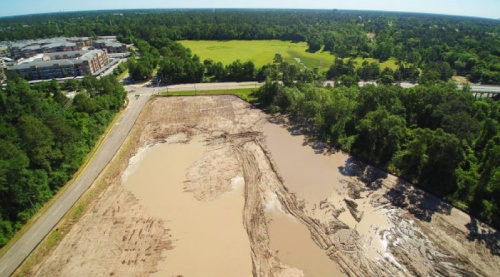 Developers have cleared 51 acres of land located by Cutten Road and Vintage Preserve Parkway with the intent to build apartments. Residents worry the development will dump more water into nearby Cypress Creek.

Updated 12 p.m. June 19: The story has been updated from its original version to clarify that the comment regarding Cypress Creek Cultural District facilities not being rebuilt if they flood again is only the perspective of one source. A representative from the Barbara Bush Branch Library, for example, has stated the library will be rebuilt if it floods again.

As of early June, plans for The Vintage development are moving forward despite outspoken resident feedback that the project, which will raise the development land by 8 feet, will lead to more flooding in neighborhoods such as Prestonwood Forest as well as areas further downstream in the Cypress Creek Cultural District.

“Our concerns right now are this development is going to … [push more water into Pillot Gully],” said Rob Terrell, executive director of the Vintage di Vita Townhomes HOA, which is next to the proposed development. “We are going to get more water our way for sure. I mean common sense just tells you that, without even doing hydrology calculations.”

However, the developers of the proposed project—Alliance Residential and Sparrow—have adhered to Harris County Flood Control District regulations for building new developments, and engineering studies conclude the developments will cause no adverse impact to flood conditions on Cypress Creek, HCFCD Deputy Executive Director Matt Zeve said at a Houston Northwest Chamber of Commerce event April 16.

“It’s that developer’s right to develop that property if they follow all the rules and regulations of the federal, state and local government—which up to this point, they have,” Zeve said.

Opponents of the project counter the development is proceeding under outdated Harris County regulations as well as outdated Federal Emergency Management Assistance flood maps, which may not accurately reflect conditions on Cypress Creek.

In response to local opposition, Zeve said HCFCD is trying to acquire the land—using taxpayer money—most likely to convert it into a park. Zeve said he ordered an appraisal of the property May 10, and the appraisal’s due date is June 24.

“We’re going to do our best to make an offer … and see if [the developers would] be willing to let us buy the land for a fair price,” he said.

The Vintage development consists of Broadstone Vintage Park apartments and Vintage Senior Living, which are being developed by Alliance Residential and Sparrow, respectively. The development was approved by the Harris County Engineering Department.

An April study by BGE, an engineering firm, concluded the development will have no adverse impact to Cypress Creek for storm events up to and including a 500-year storm event, or a flood that has a 0.2% chance of occurring in any given year.

“We looked at the … volume of water in Cypress Creek and did an analysis to make sure that we’re not pushing water faster downstream,” BGE Senior Project Manager Chris Doherty said. “It is in our drainage study, and we showed that it is … neutral for that.”

Development plans include raising the 51 acres of land eight feet as well as building a detention pond, which will drain to Pillot Gully, a body of water west of the development that flows into Cypress Creek.

“That detention basin is providing … mitigation to offset the impervious cover that is going to be placed on the site,” Doherty said.

“We’re actually lowering water surfaces slightly … a couple of tenths of feet [relative to the 51 acres of land],” Doherty said.

Despite the project’s clearance from Harris County, residents remain concerned, and some voiced their feelings of mistrust at a Cypress Creek Flood Control Coalition meeting April 17.

Residents recalled watching water pour over the banks of Cypress Creek and into their homes during Hurricane Harvey. In some parts of the creek, water levels reached more than 113 feet—by contrast, a 500-year flood would occur at 112.3 feet, according to the Harris County Flood Warning System. Now, residents said they fear the next flood event will be worse.

“When I think about digging a trench in my front yard by myself at 2 a.m. in the pouring rain … or frantically trying to find a rescue boat in the middle of the night for friends … I truly cannot help but feel disgust towards the company or people who value another apartment complex over [the community],” said Lauren Rocco Dougherty, resident of Champion Forest, which lies east of the development.

In the Wimbledon Champions neighborhood near Cypresswood Drive, all 345 homes flooded during Harvey, said Elaine Holman, president of the community’s homeowners association.

Jesica Del Aguila said she moved from Wimbeldon Champions to Vintage Royale, slightly north of the development, after her home took on 5 feet of water during Harvey.

“My family lost our home in Harvey,” she said in an email. “We moved to Vintage Royale because it didn’t flood, but now how can I be sure this won’t happen again?”

However, Zeve said The Vintage development is proceeding under the old county regulations.

Furthermore, the development is based on outdated flood maps that may not reflect the current conditions along Cypress Creek, said Jim Robertson, chairman of the Cypress Creek Flood Control Coalition. Harris County is in the process of updating FEMA flood plain maps, which will not be available for at least another two years, he said.

“We know that the flood plain maps are not correct for our current conditions,” he said. “The fact is that development is being done with criteria that is essentially out of date.”

Officials with the Cypress Creek Cultural District, a collection of community organizations and facilities located downstream of the property, are requesting HCFCD update its regulations for building new developments in flood-prone areas based on Harvey-flooding levels and avoid issuing building permits that put the community at risk of flooding.

“Prior to development of new flood plain regulations, Harris County must find creative ways to avoid issuing current building permits that increase the risk to citizens and institutions in flood-prone areas,” district President Glen Wilkerson wrote in an email.

The Centrum, Cypress Creek Christian Community center and the Pearl Fincher Museum of Fine Arts were among the district structures devastated by Harvey. If the cultural district floods again, Wilkerson said he believes many facilities will not be rebuilt.
SHARE THIS STORY