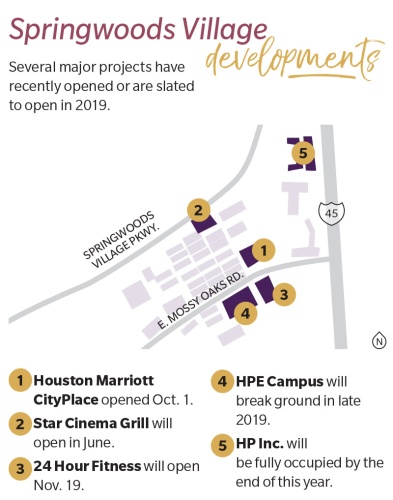 What we reported
New developments planned this year in Springwoods Village, a master-planned community located west of I-45 and north of the Grand Parkway, include 24 Hour Fitness, Star Cinema Grill’s dine-in theater and the new Hewlett Packard Enterprise campus. Recent updates include the Oct. 1 opening of the 337-room Houston Marriott CityPlace hotel, and the multitenant office CityPlace 1 broke ground in June.

The latest
A 24 Hour Fitness location is scheduled to open Nov. 19, said Warren Wilson, executive vice president of CDC Houston, the developer of Springwoods Village. Construction has not started on HPE’s campus, which will likely be complete in 2021, Wilson said. The HP Inc. campus is complete, and Wilson said he expects it to be occupied with 2,400 employees by the end of this year. Star Cinema Grill, originally reported to open early 2019, is slated to open in June. Construction for CityPlace 1 is underway and will be ready for occupancy mid-2019, Wilson said.
SHARE THIS STORY