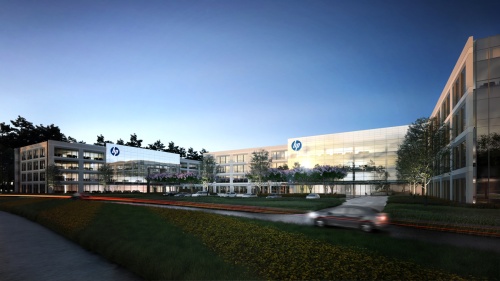 An artist's rendering of the HP office buildings in Springwoods Village.

The technology company HP Inc. has signed a long-term lease to occupy two office buildings in Springwoods Village near I-45 North and the Grand Parkway, developers announced today.

The 12-acre campus will include 378,000 square feet of office space and will house approximately 2,400 employees, according to the Patrinely Group, which is developing the site with USAA Real Estate Company and Springwoods Village developers CDC Houston. The project will begin construction in early 2017, and be completed by third quarter 2018, according to the Patrinely Group.

The campus will be located east of CityPlace, a multi-use site also being developed by the Patrinely Group and just north of the Southwestern Energy headquarters, which opened in 2014.

A bridge will connect the HP campus with CityPlace Plaza, a lakefront site featuring trails which connect the complex to the Spring Creek Greenway. The plaza will include an amphitheater for private and public events.

The American Bureau of Shipping announced in May 2016 it will occupy one of the 326,800-square-foot office buildings at CityPlace.

“With ExxonMobil, Southwestern Energy and CHI St. Luke’s open for business, and ABS and HP moving here, it is becoming clear that major employers are recognizing the benefits of Springwoods Village’s location and its high quality walkable and mixed use environment,” said Keith Simon, executive vice president of CDC Houston.
SHARE THIS STORY